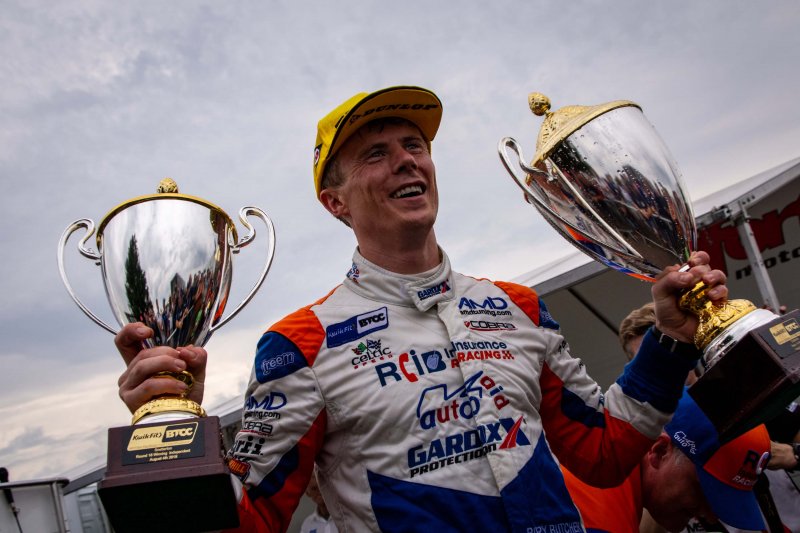 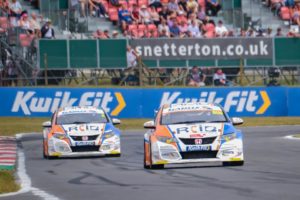 The West Thurrock-based squad was hoping to build on a strong opening half to the campaign, with drivers Rory Butcher and Sam Tordoff having secured multiple podium finishes with the team’s new Honda Civic Type Rs.

Qualifying saw Leeds racer Sam leading the team’s challenge as he secured third on the grid, with Rory just missing out on a place in the top ten despite the additional success ballast he was forced to carry into the weekend.

With drivers forced to run all three compound of Dunlop tyre on race day, strategy would be key heading into Sunday, with Sam electing to run the most favourable soft tyre at the first opportunity.

Although he would lose a place to the Ford Focus of Tom Chilton at the start, Sam reclaimed the position when Chilton went off at Coram with a puncture and kept it to the finish for his third podium result of the campaign.

Running on the medium compound tyre in race two, Sam would go under the radar somewhat with a solid drive to fifth place, which left him on the second row of the grid for the final race of the weekend thanks to the reverse grid draw.

With the hard tyre fitted for the final race, Sam duly wrapped up another solid weekend on track with sixth place, with his results across the Snetterton meeting leaving him on the fringes of the top ten in the standings.

Fife ace Rory elected to run the hard tyre in race one, taking the decision to get rid of the least favourable rubber and the additional weight at the first opportunity.

Although he would slip back to 14th during the hustle and bustle of lap one, the Scottish racer was able to work his way back to eleventh by the finish for a solid points score.

Rory would also elect to run the medium compound tyre in the second race, but contact from Tom Oliphant’s BMW at Coram saw him lose places having battled into the top ten, with twelfth place being his end result.

Running on the soft tyre in race three, Rory would produce one of the drives of the season to battle his way through the pack into third place, where he became embroiled in a three-way battle for the lead with Jason Plato and Ash Sutton.

Going three-wide with the pair into Brundle, Rory was able to get ahead into the lead and went on to secure his second victory of the campaign, and his first ‘on the road’.

The combined points across the weekend also saw Cobra Sport AmD with AutoAid/RCIB Insurance Racing secure the teams’ trophy for the first time, having picked up more points than any other team.

Shaun Hollamby, Cobra Sport AmD with AutoAid/RCIB Insurance Racing team principal, said:
“Race three was what touring car racing is all about and for us to get that win is fantastic. It’s also brilliant to have won the teams’ trophy and to be honest, I didn’t even know that existed as it isn’t something we have ever been in contention for!

“There is a massive amount of team work that has gone into this weekend. Sam picked up two great results in the first two races and then Rory has done a brilliant job in race three.

“Credit has to go to Sam, because he let Rory through in that final race when he knew he was quicker, and it is great to have two drivers who are mature enough to work together in that way. Rory’s move for the lead was then one of the best overtaking moves I’ve seen; how exciting was that race!

“We made some big changes to the car this weekend and it all paid off. We’ve learned a lot about the Honda that will help us going forwards and a huge thank you to everyone involved.”

Rory Butcher, #6 Cobra Sport AmD with AutoAid/RCIB Insurance Racing Honda Civic Type R, said:
“I’m absolutely buzzing at the end of the weekend. It was nice to get the win at Brands Hatch at the start of the season, but that was given to us because of a penalty for someone else, and to now win on the road means so much to me and the team.

“We had a tough time in qualifying and the opening two races didn’t quite go to plan for us. The engineers made some pretty radical changes to the car, and it really came alive in the final race. I had to take a few risks and make some hard moves, and when I got up towards Ash and Jason, I knew a podium was on.

“Mike [Bushell – engineer] was on the radio and told me to play it smart and when we were going down the back straight, I got a run on them both and had to go for the inside. It was a big risk to go three-wide, but it was a risk I had to take and we got the reward.

“It’s an incredible feeling to secure the win and to be able to stand on the top step of the podium. I’m grinning from ear-to-ear and this is the perfect way to kick off the second half of the season.”

Sam Tordoff, #600 Cobra Sport AmD with AutoAid/RCIB Insurance Racing Honda Civic Type R, said:
“We’ve had another good weekend, put some good points on the board and have been able to make up more ground in the standings as a result. The car has been tricky this weekend as the circuit was different to when we came here for the test, but we qualified well and it set up race day.

“It shows that if you qualify at the front, it’s easier to stay out of trouble and that is what we’ve been able to do. It’s all about being consistent and that is what we have done with our results. Three top ten finishes is a good return.

“Rory did a great job to secure the victory in race three, and as a team this has been a brilliant weekend. To get the teams’ trophy at the end of it is a fantastic reward for the work everyone has put in.”