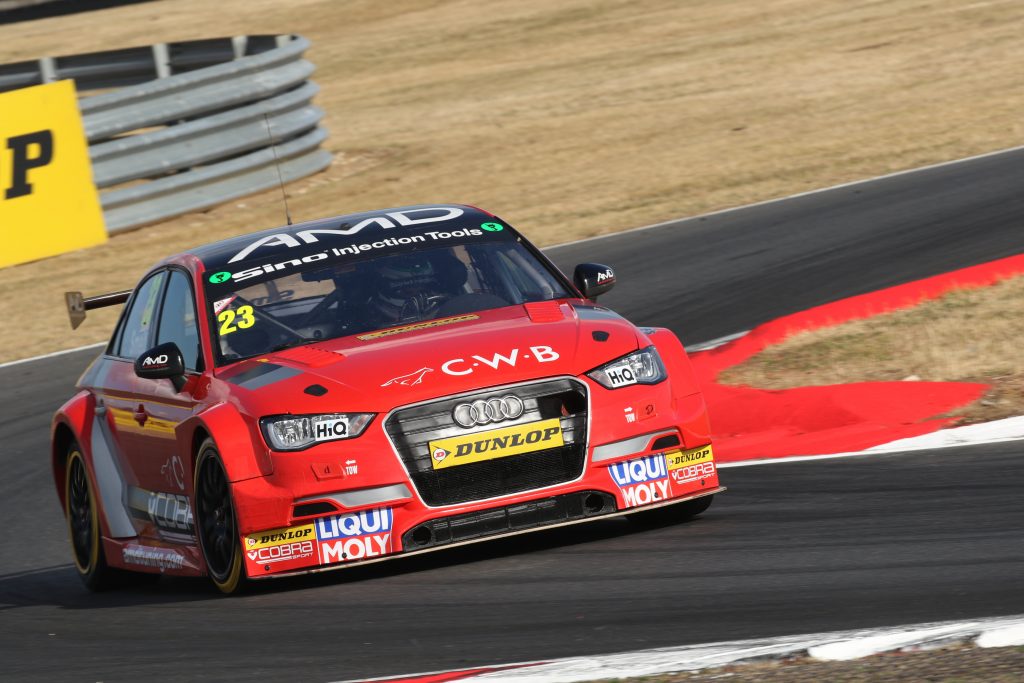 The AmD with Cobra Exhausts team was able to bring home a well-earned points finish in the special Diamond Double race as the Dunlop MSA British Touring Car Championship season resumed at Snetterton.

The West Thurrock-based outfit headed for the Norfolk circuit keen to challenge for points on the back of a solid test earlier in the month, with drivers Ollie Jackson and Sam Smelt both confident about their chances.

Tamworth-based Ollie qualified in a solid 22nd place on the grid for the opening race of the weekend with a best time just 1.2secs away from pole, whilst he would then secure 19th on the grid for the extended Diamond Double race in a second qualifying session held later on Saturday afternoon.

Wet weather arrived for Sunday morning and the opening race would end in disappointment for Ollie when he was caught up in an incident at the start that forced him to retire and left his Audi S3 at the back of the grid for race two.

In changeable conditions, Ollie would again see his race ended early when he got caught out on the damp circuit and made contact with the Honda of Matt Neal, with the team being left to repair the damage to his car in time for the extended final race, which awarded double points.

Fighting his way forwards into the points by the fifth lap, Ollie continued to make progress up the order and found himself in tenth place in the closing laps.

Contact at the final corner would ultimately see him miss out on a well deserved top ten in a drag race to the line, with his Audi eventually classified in eleventh spot after rival Senna Proctor was penalised for the last lap contact.

Northampton-based team-mate Sam qualified in 29th place on the grid for the opening race of the weekend, which saw him cross the line in 22nd spot in the challenging wet conditions.

A 20th place finish followed in the second race of the weekend before the extended Diamond Double race saw Sam produce by far his best drive of the season.

Showing quick and consistent pace from the moment the lights went out, Sam fought his way forwards into the points scoring positions for the first time before taking the flag in 18th spot – just missing out on opening his BTCC account.

Ollie Jackson, #48 AmD with Cobra Exhausts Audi S3, said:
“It’s been a really mixed weekend and races one and two are probably best forgotten. There was nothing I could do in the first race with the incident off the line and then in race two, I hold my hands up that I got caught out by the conditions and apologised to Matt for the contact. 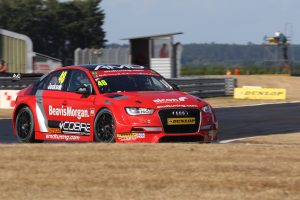 “The team did a mega job to get the car out for the final race and even though we didn’t have time to get the set-up right for the conditions, the car felt great. We showed really good pace from the start and it’s a shame that we missed out on a top ten finish because of contact on the final lap.

“Overall, it’s been a tough day for us but to come away from the Diamond Double race with such a strong showing is good consolation at the end of it.”

Sam Smelt, #23 AmD with Cobra Exhausts Audi S3, said:
“I’m happy that I’ve ended the weekend with a strong showing in the Diamond Double race but at the same time, I’m gutted to come so close to the points and then miss out. One small mistake cost me a load of places but I have to just live and learn from it. 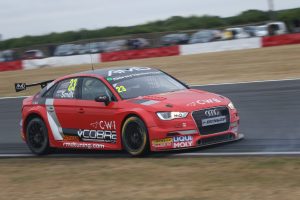 “After a difficult race one, we showed good pace as race two went on and throughout the final race we were consistently strong which is a big positive for me. The longer race really suited me and hopefully I can build on my performance in that one in the races that are to come.”

Shaun Hollamby, AmD with Cobra Exhausts team principal, said:
“It’s been a tough day for the Audis but it was great to see both Ollie and Sam put on such a strong showing in the final race of the weekend. Ollie was unfortunate in the first two races but the way he fought back in race three was really good and he should have been able to celebrate a top ten finish.

“For Sam, the final race was also really good and the longer race really suited him. His lap times were consistent throughout and it was unfortunate that he wasn’t able to break into the points because his performance certainly deserved some.”