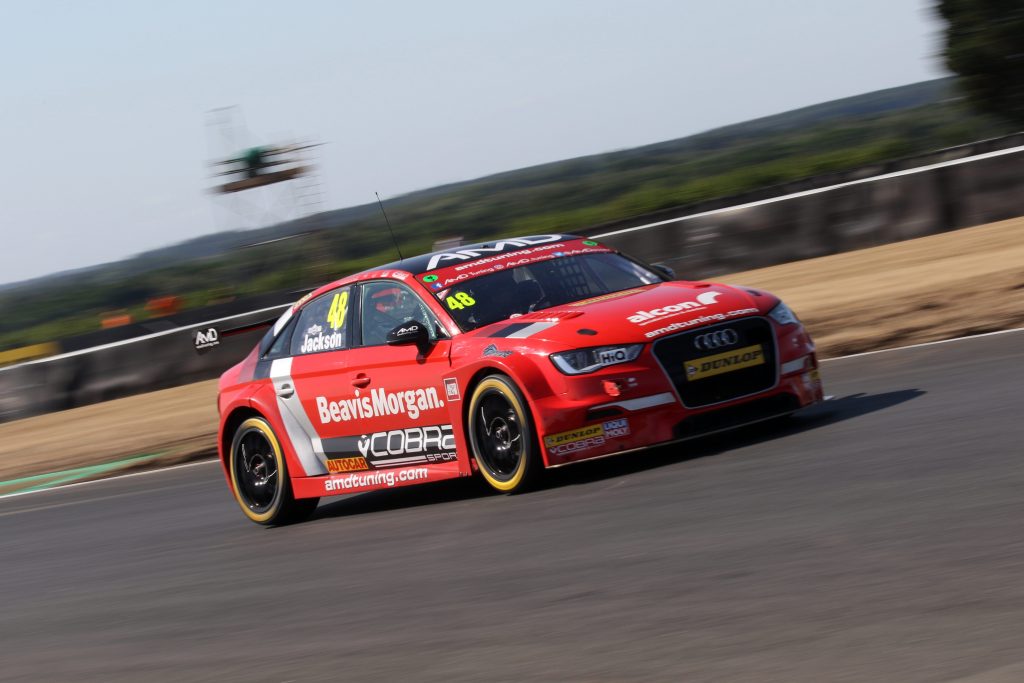 The AmD with Cobra Exhausts team will seek to maintain a strong recent record at Rockingham when the Dunlop MSA British Touring Car Championhip heads for the Northamptonshire circuit for the seventh meeting of the year.

The West Thurrock-based squad picked up three points finishes in the corresponding meeting last year to add to two the season before with its Audi S3, and returns for what could be the final BTCC event at the oval venue keen to add to its tally.

Tamworth-based Ollie Jackson was the man who scored those three points finishes twelve months ago and heads into the weekend keen to bounce back from a tough meeting at Snetterton last month.

Despite showing strong pace on track, Ollie was left to rue two unfortunate bouts of contact that prevented him from pushing for points in all three races – with a strong eleventh place in the special Diamond Double race allowing him to at least end the weekend on a high.

Ollie has a strong past record at Rockingham, with a total of nine points scoring finishes being more than he has achieved at any other circuit on the calendar – and a record he will seek to add to during the weekend ahead.

Northampton-based team-mate Sam Smelt goes into the first of two ‘home’ meetings on the calendar eager to build on the encouraging performance he enjoyed last time out in Norfolk.

A battling drive in the final race of the weekend saw the series rookie come agonisingly close to what would have been a maiden points finish, and the youngster will seek to try and make amends with a top 15 finish during the weekend ahead.

Like Ollie, Sam has enjoyed strong results at Rockingham in the past, with an eighth place finish twelve months ago being his best result during a part campaign in the BTCC-supporting British F4 Championship.

Ollie Jackson, #48 AmD with Cobra Exhausts Audi S3, said:
“We have a few things to try with the set-up of the car when we get to Rockingham but we know that it is a circuit where we have traditionally been strong with the Audi. Given this might be the last time we race there, it would be nice if we could sign off with some good results.

“We showed good pace at Snetterton last time out even if the end results didn’t reflect it, but I see no reason why we can’t aim to be in the mix for three good points finishes this weekend and I think we could push for a top ten if things fall our way.

“I enjoy Rockingham as a track and I’m going into the weekend feeling confident about what we can achieve.”

Sam Smelt, #23 AmD with Cobra Exhausts Audi S3, said:
“After a strong end to the weekend at Snetterton, I’m really looking forward to getting back behind the wheel at Rockingham. Hopefully we can start where we left off and hit the ground running in practice and then build from there. 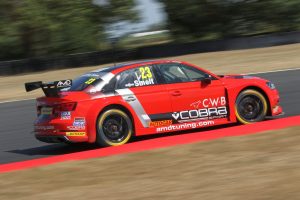 “Rockingham is a circuit that I know fairly well so I shouldn’t take too long to get used to the track in the Audi, and the big focus has to be on improving my performance in qualifying on Saturday.

“My race pace has been good in recent meetings but poor qualifying results have made it a struggle, and I know that if we can sort out qualifying and be starting from further up the grid, then the results will follow.”

Shaun Hollamby, AmD with Cobra Exhausts team principal, said:
“We’ve always been strong with the Audi at Rockingham for some reason, and hopefully the same will be true this weekend and we can push to add some more points to our tally.

“Ollie had one of his strongest weekends of the season there twelve months ago and has only failed to score twice whilst racing our cars, and we are confident that he can maintain that impressive record and add to his tally.

“Sam showed that he has the pace to challenge for points in the last race at Snetterton. People might not have realised the progress he has made over the course of the year and it would be great if he could push for his first points of the year, and a real reward for the steps forward he has taken.”