The West Thurrock-based team went into the opening meeting of the campaign eager to impress, with returning driver Ollie Jackson keen to push for points and series debutant Sam Smelt targeting valuable mileage to build his experience.

Tamworth-based Ollie showed solid pace throughout practice but the right nature of the times meant he had to settle for 23rd on the grid in qualifying despite being just six-tenths of a second away from pole position. Northampton-based Sam meanwhile lined up 32nd on the grid for race one with a best time less than 1.2secs off pole.

Rain greeted the team for the opening race of the weekend but Ollie reveled in the wet conditions when the lights went out, fighting his way up to 16th place on the opening lap and into the points by the time the Safety Car was deployed on lap two.

Racing hard in the midfield throughout, he brought his Audi S3 home to the finish in twelfth spot to pick up some early championship points whilst Sam achieved his aim of a solid finish in 24th.

Changeable conditions going into race two left teams with a decision to take over which tyres to run, with Ollie and the team gambling on going with slick rubber on the drying track.

Early on, that meant he slipped back down the order but as the circuit conditions improved, so he started to rapidly climb his way up the order. From 21st at the end of lap twelve, Ollie had raced his way into the top eight by lap 20 and continued to pick off the drivers ahead to run in a four-car train battling for the lead with three laps to go.

When one of those cars ahead then ran off track, Ollie moved into third place to secure his maiden BTCC podium, a first for the Audi S3 and the team’s first since Knockhill in 2014. 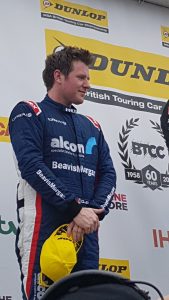 Sam elected to run with wet tyres and that allowed him to climb up into the top 20 in the early stages of the race but he would ultimately finish 25th when the performance of his tyres dropped away.

Fourth on the grid for race three thanks to the reverse grid draw, Ollie made a strong start despite being forced to carry success ballast on his car and climbed up to second when the lights went out.

Although he would slip back to seventh  place, Ollie looked well placed to pick up another strong finish only for contact on the final lap to cost him valuable places as he crossed the line in 14th.

Sam’s strongest drive of the weekend was rewarded with another 25th place finish as he got involved with racing with the pack; gaining valuable experience to take forwards into the races to come.

“It’s been an emotional weekend. We’ve worked so hard as a team to improve the Audi and have been getting quicker and quicker, and today we’ve been able to fight for strong results across all three races. 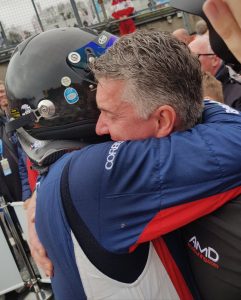 “Race one was perhaps the race of the day to be honest and to come from where we where on the grid to finish twelfth was really good and helped to set up the result in race two.

“We knew it was a gamble to go with slicks but also knew that the circuit was only going to get drier and it proved to be the right call. The car was absolutely fantastic and to bring home a podium was beyond our expectations coming into the weekend.

“Even with the success ballast onboard for race three, we could well have had a top five finish had we not been hit off track a few times, which also cost us the Jack Sears Trophy this weekend.

“However, I can’t go away from a weekend where I’ve taken my first podium feeling disappointed and I think we have shown this weekend that we deserve to be taken seriously in this series and aren’t just here to make up the numbers. We have to now try to build on this and fight for regular points as the season goes on.

“It’s been a good weekend for me. Coming into the weekend my aim was to have three clean races and pick up three finishes and that is what I’ve managed to do. I think I improved in terms of my performance on track every time I went on track, and the feedback I was able to give the team has also improved.

“It’s been good for me to sample all kinds of weather and the experience will only aid me going forwards through the rest of the year. This weekend has been a case of mission accomplished and my focus now is on trying to take another step forwards when we get to Donington Park.”

“It’s been a fantastic weekend to start the season and to come away with a podium is way more than we could have imagined.  The team has worked hard all weekend to improve the car and both Ollie and Sam have done a good job on track.

“Ollie has driven better than he has ever done before across race day and he made the most of the tyre call in race two with a fantastic performance. To secure his first podium in that way was brilliant but it was just as impressive to see how he drove with extra weight in the car in race three. If anything, that showed the steps forward we have taken with the Audi and he certainly deserved more than he got.

“The conditions this weekend have made it difficult for Sam given his experience, but he has done exactly what we wanted him to do. He stayed out of trouble, has got quicker as the weekend has gone on and put in a solid drive in race three.

“I have to give huge thanks to everyone involved with the team for their efforts on a weekend like this, particularly the likes of Cobra and Carbon Clean as we wouldn’t be racing without their support and hopefully we can build on these results as the season goes on.”