AmDTuning.com puts points on the board at Brands Hatch 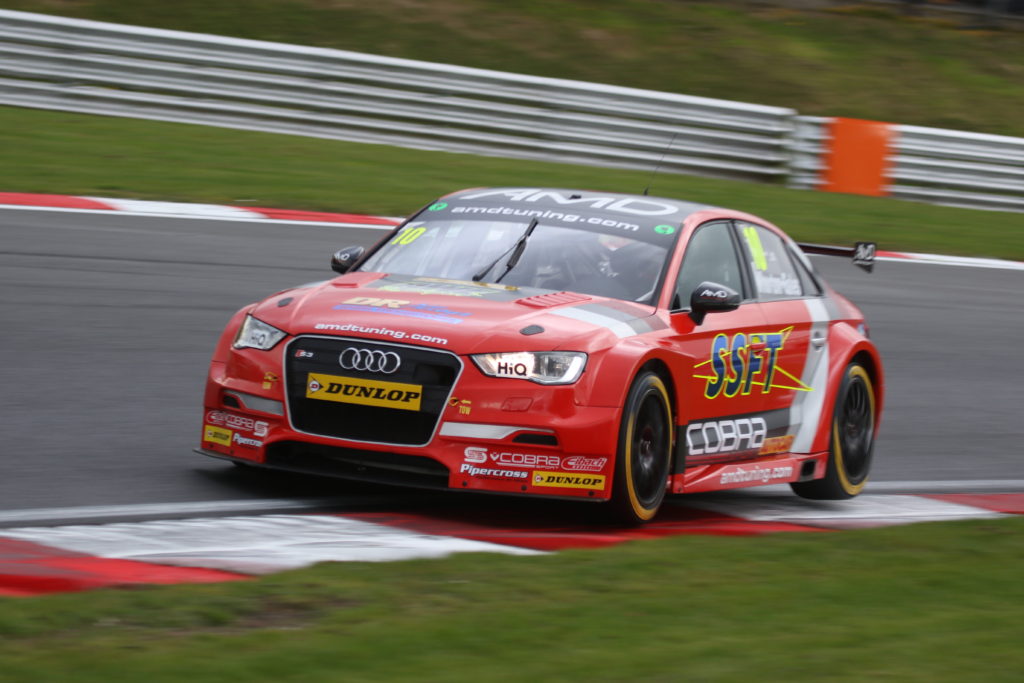 The AmDTuning.com with Cobra Exhausts team enjoyed a points scoring start to the new Dunlop MSA British Touring Car Championship season as the 2017 campaign kicked off at Brands Hatch.

The West Thurrock-based team made the short trip to the Kent circuit hoping to impress with its updated Audi S3s, with returning driver Ollie Jackson being joined by series debutant Ant Whorton-Eales as part of an expanded two-car team.

Tamworth-based Ollie would be left with work to do on race day having been caught out by difficult conditions on track in qualifying, with rain showers and traffic contributing to him being down in 29th place on the times.

Running the softer compound Dunlop tyre in race one, Ollie worked his way forwards to 22nd place and then set about further progress when the lights went out in race two – lapping quickly and consistently to fight his way through to 14th and a first points scoring result of the season.

More points looked assured in race three as Ollie moved up to twelfth place on the opening lap, with a top ten finish looking to be a realistic goal until contact from behind knocked the rear tracking out on the Audi.

It meant Ollie would slip back down to 16th by the time the chequered flag flew, although there was still plenty to be encouraged by at the end of the weekend.

“I’m ecstatic with the progress we have made across the weekend with the car,” he said. “It was quite difficult to drive at the start of practice but we made a series of changes that really improved things and I head away from Brands Hatch confident that we have the Audi in a good place but with plenty more still to come.

“The points in race two were good, and I think we can take a lot of encouragement from race three as it showed we have the pace to run at the head of the midfield pack and to challenge for the top ten.

“That’s something we could certainly have achieved without the contact that damaged the rear of the car, but we can head for Donington Park next time out in confident mood.”

For Lichfield racer Ant, qualifying would also prove to be a challenge, which left him 26th on the grid for the opening race.

Any hope he had of a strong result were ended by the need to pit early on when a warning light appeared on the dash, with the reigning Clio Cup champion then able to rejoin the race but a lap down on the rest of the field.

Encouragingly, Ant was able to run with the midfield pack despite being a lap behind and posted a number of quick laps before the chequered flag dropped with him in 25th spot.

Having run inside the top 20 early in race two, Ant would unfortunately retire after being caught up by a clash between three rival drivers ahead with the team repairing his damaged Audi in time for race three.

A 23rd place finish left him with two Independents points scores from the weekend, with the 22-year-old optimistic that better results lie ahead when the series heads to Donington Park.

“The results on paper this weekend don’t really show what we are capable of, which is a shame,” he said. “I think I was a bit too reserved in the conditions in qualifying as I didn’t want to be the new boy who threw it off in the wet and it meant we were out of position for race one.

“Although the need to pit meant I wasn’t able to get the result, the pace when running with the pack was really good and I think it showed we could have been in the mix if I’d qualified higher up the grid.

“Race two was just unfortunate and one of those things that happens, which meant we were at the back for race three and had to get what we could from it. I’ve learned a lot this weekend and from working more with the team, and I’m confident that we have a good car that we can push on with at Donington.”

Team boss Shaun Hollamby was pleased to see the Audi show its pace during the opening meeting of the year after a hectic winter, and expressed confidence that points scoring finishes can now be a regular aim.

“I think it’s been an encouraging and positive start,” he said. “When you consider that we only got the new engine fitted to Ant’s car on Friday night and have only done limited testing, we knew this weekend wasn’t going to be easy but we’ve come away from it with a points finish and knowing we could have had more.

“We’ve ended the weekend with a car that is both quick and reliable, and that has shown it is more than capable of scoring points. It’s now down to us to build on the potential we have seen and push our way up towards the top ten, and the performances out of the box here will spur us on to bigger and better things.”