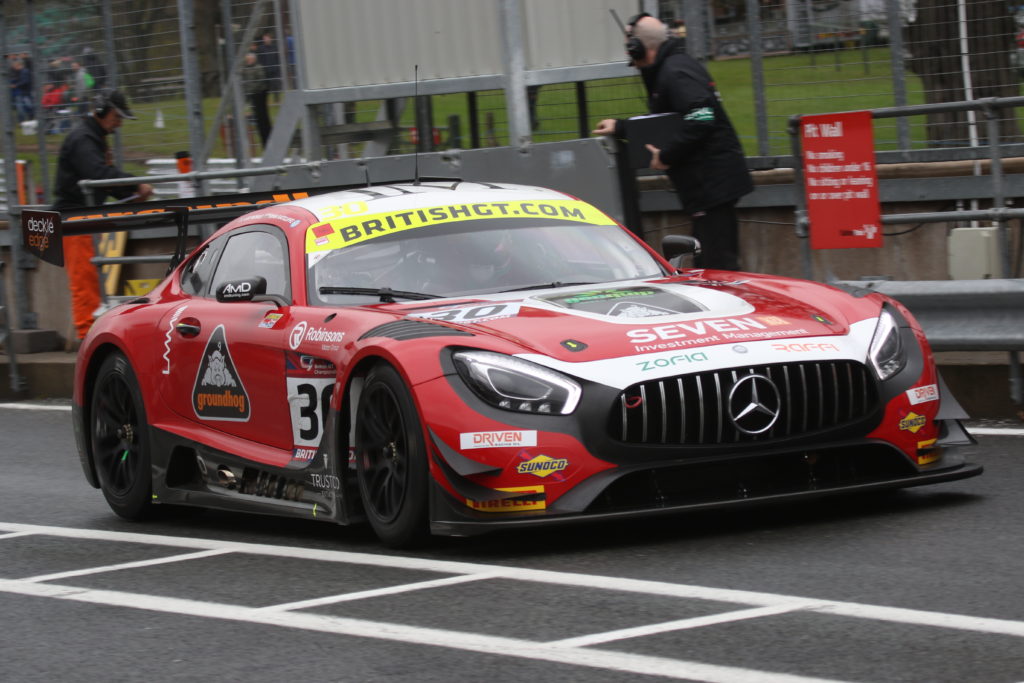 The AmDTuning.com with Cobra Exhausts team showed glimpses of its potential as the new British GT Championship campaign burst into life at Oulton Park.

The Easter Weekend event marked the start of a new era for the West Thurrock-based outfit, with the Cheshire circuit playing host to the team’s first race with its all new Mercedes-AMG GT3.

The weekend started well in the opening practice session with Ryan Ratcliffe posting the fifth quickest time in damp conditions, although the team was prevented from running through its planned programme by an accident involving two GT4 cars that led to the session being halted just before the halfway stage.

It meant team-mate Lee Mowle had to wait until the second session to get his turn behind the wheel, with the two drivers lapping within half a second of each other en-route to the eighth best time.

With two one hour races during the opening meeting of the season, each driver took to the track for their own qualifying session, with Lee out first to determine the starting position for race one.

However, Lee was unable to show his true pace when contact at the final corner after the Aston Martin of Derek Johnston turned in on him damaged both the suspension and steering on the car.

Having not yet had time to post a timed lap before the clash, Lee was left ninth on the grid for race one, with Ryan forced to soldier on with the damaged car for his qualifying session en-route to the tenth best time for race two.

With repairs carried out for Monday’s opening race, Lee took his place behind the wheel for the first stint and produced a strong start to immediately fight his way to sixth before getting ahead of the Ginetta of Harry Gottsacker with an impressive move on lap eight.

Sadly his charge up the order would end on lap ten when he went off into the barriers on the run to Shell Oils. Although he was able to rejoin, the incident would drop the damaged car well down the order, with Lee starting a recovery drive that Ryan would then continue during his stint to bring the car to the flag in tenth spot.

Repairs to the car were completed just minutes before the start of race two, with both drivers lapping quickly and consistently to reward the team with a seventh place finish in a race that was halted early after an accident at Hilltop; one that Lee was fortunate to avoid being caught up in.

Following the fight against the clock to repair the car, AmDTuning.com with Cobra Exhausts picked up the PMW Expo Team of the Weekend Award, whilst Lee and Ryan end the weekend eighth in the championship standings.

Round three of the year – a two hour long race at Rockingham – takes place at the end of the month.

“Oulton Park is a circuit where it isn’t easy to overtake in a GT3 car, so the incident in qualifying really put us on the back foot. It was a real shame as we hadn’t had chance to put a banker lap in, and based on practice, I think we could easily have ended up in the top four on the grid for race one, and Ryan would also have had us higher up the grid for race two.

“In the opening race, the car felt absolutely mega and a world away from the BMW we raced last year. It was hard work making my way through the field, but we got up to P5 and then I just carried a little too much speed into Island Bend and got slightly wide onto the wet part of the circuit.

“Once I then hit the grass, I was a passenger and it seemed an age until we hit the barriers. It was a big hit and did a lot of bodywork damage, so it was a case from there of us just bringing the car to the finish.

“The team did a brilliant job to repair the damage for race two and we made it out with seconds to spare, although there was no time to check the tracking or to put a set-up on the car. We knew that would make it difficult in the dry so we had to do what we could and pick up the points.

“Although the results aren’t what we hoped for, there’s no doubt that we had could have come away from the weekend with a podium. The car handled superbly and provided loads of confidence behind the wheel; things just conspired against us. While it’s a case of what might have been from Oulton Park, the two hour race at Rockingham should suit us and we’re looking forward to a strong weekend there.”

“There are a lot of positives to take away from the weekend, even considering that the end results weren’t what we hoped for. Both Lee and Ryan showed solid pace behind the wheel and I think that there was clearly the potential to run higher up the field in the races had it not been for the incident in qualifying.

“That was always going to make it tough for race day but we showed what the Mercedes can do in the early stages of race one before Lee was caught out by the damp conditions. From there, we showed our battling qualities to not only get a finish from the race, but to get the car repaired and back out for race two.

“The longer race at Rockingham next time out is one that should suit the Mercedes, and we’re confident that Lee and Ryan will be firmly in the mix for a strong result.”

Credit to Marc Waller for images.