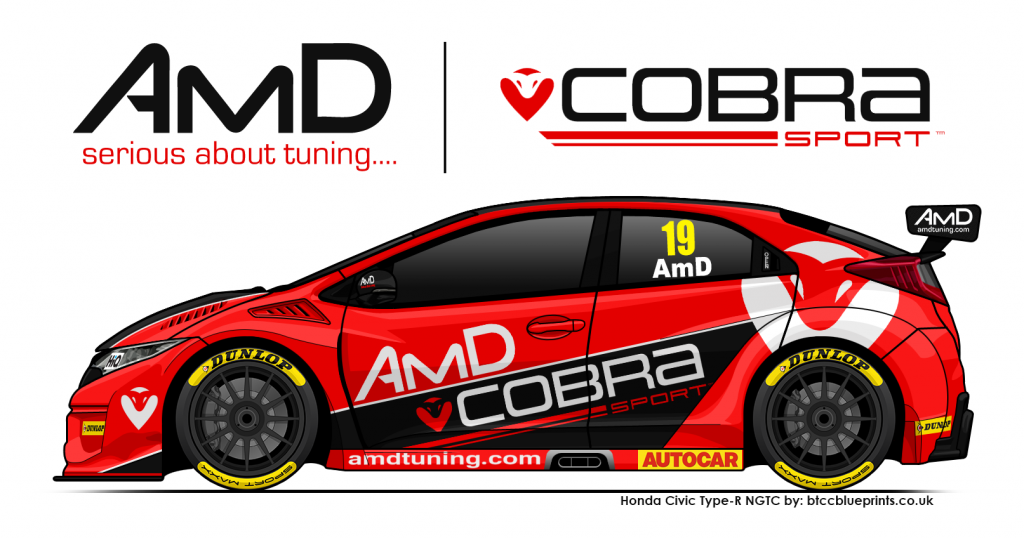 In partnership with Cobra Sport Exhausts, the West Thurrock-based outfit has acquired the two cars that secured race wins and multiple podiums in recent seasons with the Eurotech team, as well as the TOCA BTCC Licences (TBLs) that are required to run them in the series.

The addition of the two Hondas means the team will continue to run a four-car programme in the series, having expanded twelve months ago when it took over the running of a pair of ex-works MG6 GTs alongside two Audi S3s.

The Hondas will take the place of the two MGs in the AmD line-up, with those cars set to move on to new owners in the coming months.

Having taken collection of the two Hondas last week, work is now underway preparing the cars for the start of pre-season testing.

Discussions with potential drivers and title sponsors are already underway, with further announcements to be made in due course.

“Last season, it was a big move for us to expand to a four-car team and after a successful 2018, we are again seeking to move forwards to the next level,” AmD team principal Shaun Hollamby said.

“Whilst we enjoyed some strong results on track with the MGs, the opportunity to purchase the ex-Eurotech Hondas was one that was too good to turn down as you only have to look at the stats to see what a strong package the FK2 Civic Type R is.

“Acquiring these cars provides us with a fantastic platform to really raise our game and fight consistently towards the sharp end of the grid, and we are already in discussions with drivers who we know are capable of helping us to achieve our goal.

“Without doubt, this is the most exciting development for us as a team since we joined the BTCC, and we have to thank Cobra Sport Exhausts for helping to make it possible. Together, I’m extremely confident about a successful 2019.”

As part of the expanded relationship, Cobra Sport Exhausts Managing Director Rachel Abbott will take on a joint team principal role alongside Hollamby during the season ahead.

“Cobra Sport Exhausts have been involved as title sponsors for a number of years now and our involvement in the management of certain aspects of the team has increased over this time,” she said. “We are very excited to be taking the next step as joint team owners with AmD Tuning in our new team, Cobra Sport AmD Racing.

“We are delighted to have purchased – with Shaun – the two Hondas and TBLs from Jeff Smith at Eurotech Racing. Jeff was a pleasure to deal with, and he and his team have done a tremendous job with the development of the cars over the last few seasons.

“Professional motorsport involvement runs in the family as my father drove the British Saloon Car Championship’s championship winning Team Broadspeed’s Ford Anglia in the 70s and 80s and was also a team owner of a Formula Ford 2000 race team.

“I am proud to be able to continue the family tradition and on a personal level, I am looking forward to working with Shaun as joint team principal on this new venture. Shaun has a wealth of knowledge in motorsport and he has built a great team of talented people who I have had the opportunity to get to know over the last few seasons.

“I am excited to see what we can achieve together in 2019 and beyond.”

The livery in which the Cobra Sport AmD Racing Hondas will race will be revealed at a later date.