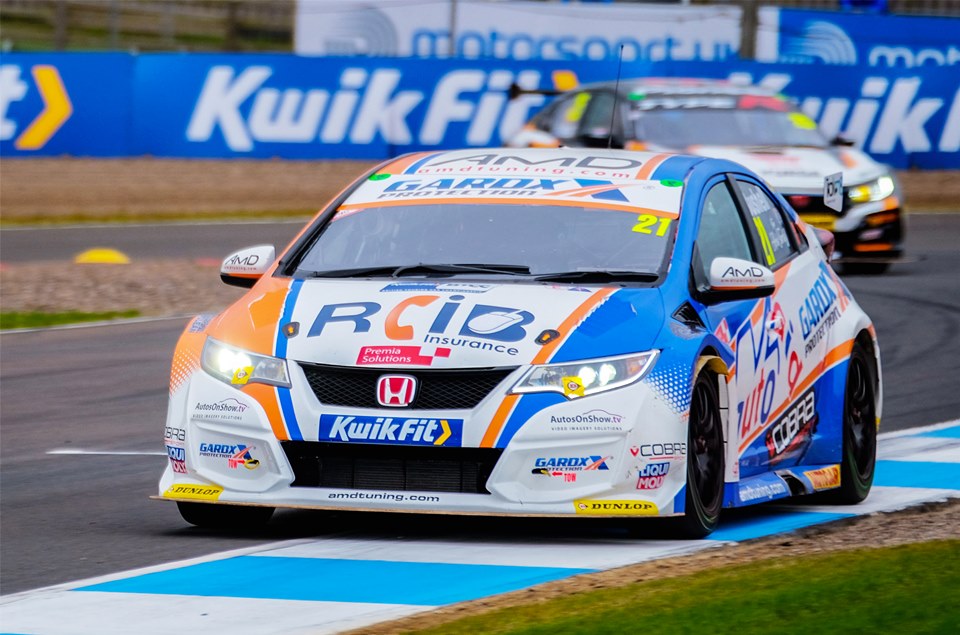 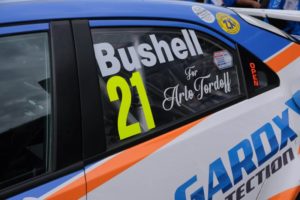 The Cobra Sport AmD with AutoAid/RCIB Insurance Racing team secured a fourth win of the Kwik Fit British Touring Car Championship season on a stunning weekend of competition at Knockhill.

The West Thurrock-based team made the long trip to Scotland hoping to fight at the sharp end of the grid, with home hero Rory Butcher joined in the two-car line-up by the returning Mike Bushell.

At the circuit owned by his family, Rory was the man to beat throughout Saturday at the wheel of his Honda Civic Type R, topping both free practice sessions before romping to his maiden pole position in qualifying.

Maintaining his lead at the start, Rory found himself under pressure when he lost second gear during an early safety car period, which left him to try and complete the remainder of the race with nothing below third gear.

Keeping the BMW of Andrew Jordan at bay, Rory briefly slipped back to second at the start of the final lap but then reclaimed the place at McIntyres and went on to secure a popular home win.

With the gearbox replaced, a battling drive to third in race two despite carrying maximum ballast and being on the medium compound tyre saw Rory secure more silverware, although he also picked up a five place grid penalty for race three after contact with Colin Turkington.

That left him right in the middle of the pack for race three, where he secured more points with 14th to maintain his Jack Sears Trophy lead and remain right in the hunt for both the overall and Independents’ championship titles.

Having been asked to step in for the absent Sam Tordoff after the tragic death of his newborn son Arlo, Mike was quickly up to speed in free practice and then qualified 16th on the grid for the opening race of the weekend.

Mike’s hopes of a points-scoring finish were ended on the opening lap of the race when contact at turn one damaged the rear suspension on his car and forced him to retire.

There was to be more misfortune in race two when he was forced to pit with a loss of power, which was traced to a loose connection under the bonnet.

Returning to the track a number of laps down to make sure that the issue was resolved ahead of race three, Mike was left to wonder what might have been as he posted a new lap record – making him the only driver to lap below the 51 second marker across race day.

Unfortunately, race three would end in disappointment when contact with Rob Collard’s Vauxhall Astra at Clark’s ripped the left rear wheel from the Honda and meant he failed to finish for a third time.

The team will now look to maintain its title challenge when the series heads to Silverstone on the weekend of 28/29 September.

Shaun Hollamby, Cobra Sport AmD with AutoAid/RCIB Insurance Racing team principal, said:
“It’s been a fantastic weekend for us as a team, and to come away from Knockhill with pole position, a race win, another podium and a new lap record is just brilliant. To be honest, it’s a bit of a surreal feeling when you consider where we have come from as a team and I’m proud of the whole team.

“Rory has done a stunning job this weekend and to win in the manner he did in race one was fantastic. Mike has also done a better job than the results will show in difficult circumstances as he was on the pace from the moment he got in the car and his speed was shown in the fact that he broke the lap record.

“This weekend we were racing with Sam, Georgina and Arlo in our thoughts, and I’m delighted that we’ve been able to bring home some good results for them.”

Rory Butcher, #6 Cobra Sport AmD with AutoAid/RCIB Insurance Racing Honda Civic Type R, said:
“I think that has been our best weekend to date in terms of the results. We laid down a real marker on Saturday to top all three sessions with a good gap, although Sunday was a bit more difficult.

“Andrew kept me honest throughout race one and it was a real challenge after I lost second gear. I had to really drive to the maximum around the lap to build a gap because I knew that taking the hairpin in third gear would leave me open to attack.

“To bring the car home in front of the Scottish fans was an amazing feeling as there was a lot of expectation on me this weekend, and a lot of people here supporting me.

“A podium in race two was a good way to reward the guys for their hard work changing the gearbox, and race three was one of those where I had to get what I could whilst racing in the pack.

“Overall it’s been a fantastic weekend and I’d like to dedicate the win to the Tordoff family. They’ve all been in our thoughts, and that one is for them.”

Mike Bushell, #21 Cobra Sport AmD with AutoAid/RCIB Insurance Racing Honda Civic Type R, said:
“It’s nice to come away from the weekend with a new lap record to my name as it shows that I’ve not lost any speed during my time away from the car, but I certainly haven’t had any luck on my side.

“There wasn’t a great deal that I could have done in any of the three races to change what happened as two bouts of contact and a mechanical issues that was simply down to circumstances have prevented me from picking up some results.