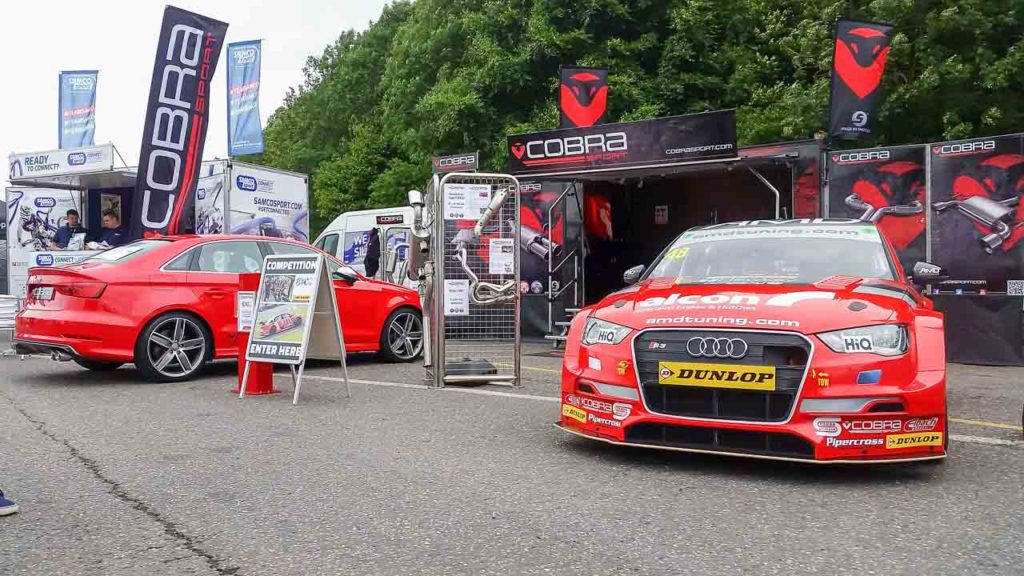 Cobra Sport attended the inaugural PAAA Performance Tuning Event at Brands Hatch at the weekend alongside the Tunerfest South and third round of the UK Time Attack events. The Cobra Sport events trailer impressed alongside the core of the PAAA members present at the event, showcasing our latest products amongst the tuning industries finest companies.

Taking pride of place on the stand we had the AmDTuning with Cobra Exhausts British Touring Car driven by Ollie Jackson having recently been repaired after the hugely successful BTCC event at Croft earlier this month. The other AmDTuning with Cobra Exhausts S3 driven by Ant Whorton-Eales is currently undergoing extensive refurbishment works after severe damage to the chassis during the same event at croft.

Sitting alongside the BTCC car we had a stunning Audi S3 Saloon fitted with a Cobra Sport resonated cat back exhaust providing a pitch perfect highly tuned sound track to the PAAA show area during the hourly exhaust sound demonstrations. The Cobra Sport performance exhaust system fitted to the road going Audi boasts the same exhaust technology proven on the track by the BTCC car for which a custom performance exhaust system was built at our Sheffield HQ earlier this year in preparation for the 2017 British Touring Car Championship season.

The next event in the busy summer show calendar is the VAG Tuner Show at Donington Park on Sunday 16th July.