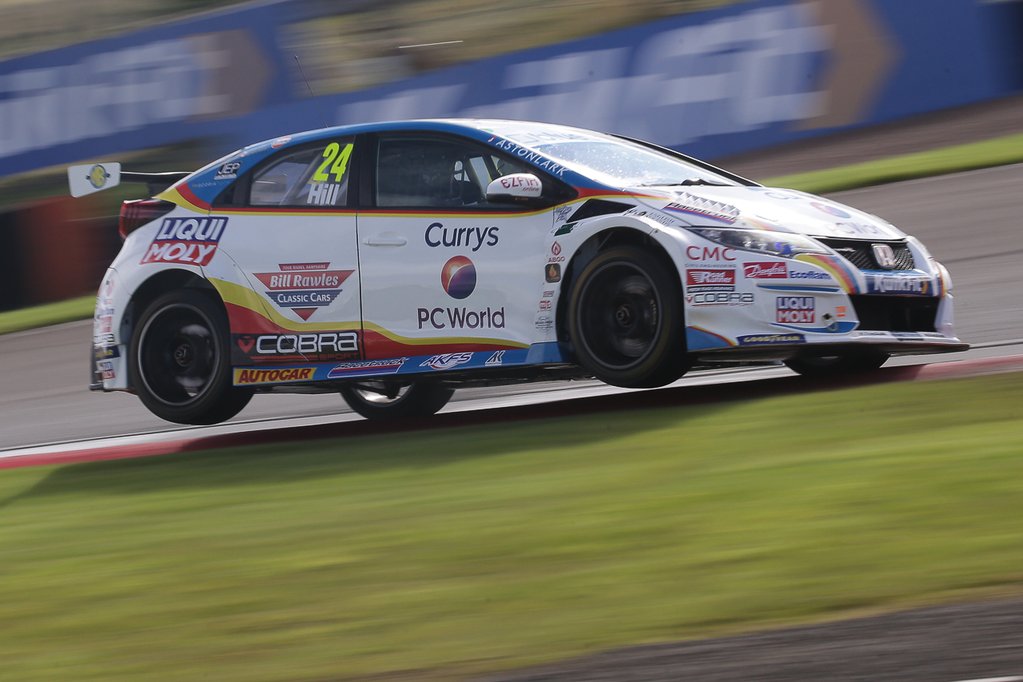 AmD Tuning with MB Motorsport accelerated by Blue Square enjoyed another strong weekend at Knockhill as the Kwik Fit British Touring Car Championship headed for Scotland for the fourth round of the season, with the team taking to the podium for the second weekend in succession.

Buoyed by a strong showing at Oulton Park a week earlier, the Honda team made the journey to Scotland keen to fight towards the sharp end of the grid and that was evident from the outset, with Jake Hill putting the #4 Civic Type R on top of the timesheets in free practice before he qualified in a career best second on the grid.

Team-mate Sam Osborne meanwhile showed strong pace in the sister car throughout practice before qualifying in 18th place, with the prospect of more to come on race day.

As expected when the opening race kicked off on Sunday morning, Jake was beaten off the line by Colin Turkington’s fast-starting BMW but he slotted into third spot and kept the points leader honest through the opening laps.

After an early safety car period, Jake maintained his position despite pressure from Tom Ingram behind and was rewarded with his first podium on the road this season in a fine third place. Sam would run inside the top 20 throughout despite a trip across the gravel at Clarks, and took the finish in 19th place.

Carrying additional success ballast into race two, Jake fought hard to try and keep his car near the front after another early caution period but lost out at the start of lap five when he was forced wide whilst defending his position – slipping down to seventh place

Another safety car late on would close up the pack and Jake would end up crossing the line in ninth spot, with Sam bettering his result from the opening race as he crossed the line in 18th after a frenetic battle within the midfield. The reverse grid draw put Jake on the second row of the grid for race three, but it was a race that would be halted after an accident on the second lap that unfortunately involved Sam in the sister car. Heading into the blind crest at the chicane, Sam suddenly found two of his rivals stopped on the racing line, and heavy contact with Mike Bushell’s Vauxhall ripped the front left wheel from his car and put him into retirement.

The race would restart across a shortened distance of 20 laps, with Jake running sixth in the early stages before battling ahead of the Hyundai of Chris Smiley. Once into fifth spot, Jake eased away from the squabbling pack behind to secure another solid haul of points to cap his highest scoring weekend of the year to date.

Shaun Hollamby, Team Principal, MB Motorsport accelerated by Blue Square:
“It’s nice that we were able to build on a good Saturday at Knockhill with a strong performance on race day, and Jake has shown good pace throughout. A podium was a great way to kick things off, and he has driven well with more weight onboard in the other races to score a good haul of points. Sam hasn’t been able to really show his true pace today, and race three was just a case of wrong place, wrong time when the incident happened ahead of him. I’m confident that he’ll be back pushing for points next time out.”

Mark Blundell, Sporting Director, MB Motorsport accelerated by Blue Square:
“After qualifying, I said that I felt momentum was building for us as a team and I’m really pleased we have been able to show that on race day. Jake drove well in race one to secure our first ‘proper’ podium finish and has been right in the mix across race day to score some good points and make progress in the standings. Sam has been unfortunate, but he has shown his pace again this weekend and continues to improve, so we can head into this short break ahead of Thruxton in a good position.”

Jake Hill, #24 Honda Civic Type R, MB Motorsport accelerated by Blue Square:
“I’m chuffed to bits. Oulton Park was a nice weekend to get back on our feet after a tough start to the year, and we’ve come to Knockhill and things have been a bit better again. My first front row start in the BTCC was a great way to kick things off and then we’ve had three solid finishes in the race.

“I’m over the moon to get a podium, and the other big plus for me is that we haven’t had any of the mechanical issues that have affected us so far this year; the car was great. I’m not really thinking about the points, but we still have five rounds to go and it would be nice if we could keep making progress and climb the order a bit more.”

Sam Osborne, #4 Honda Civic Type R, MB Motorsport accelerated by Blue Square:
“It’s been a tough weekend that started well in practice where I think we showed good pace, but in qualifying, I didn’t quite hang it all together and was probably over-driving a little bit. In the first two races, I was struggling for some reason with the front tyres which hampered my chances of moving forwards, and we’d made some changes for race three with the aim being to try and push for the points.

“Sadly, coming through the chicane, it all kicked off ahead of me and suddenly Mike’s car was there in front of me and the race came to an abrupt end. It’s a shame, but that is how racing can be sometimes.”