More Points On The Board For AmDTuning.com At Donington Park 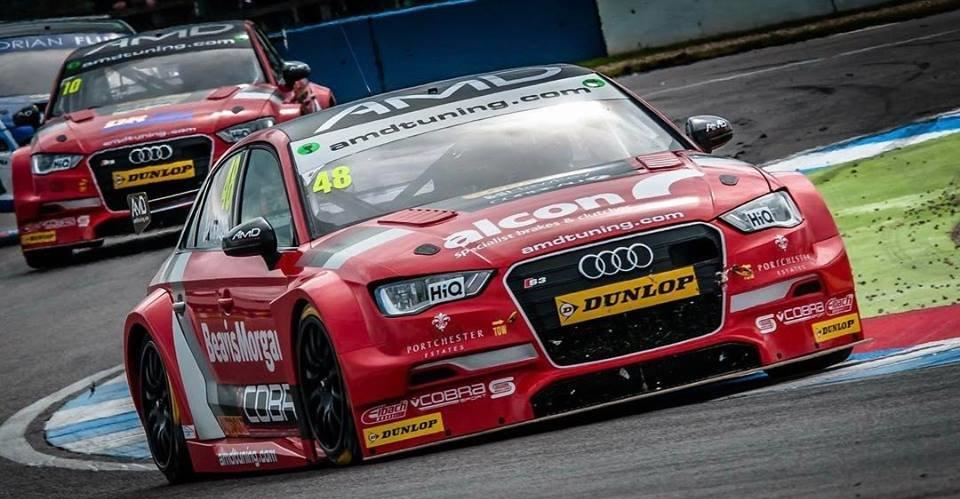 The AmDTuning.com with Cobra Exhausts team enjoyed another points scoring weekend with a brace of top 15 finishes as the Dunlop MSA British Touring Car Championship headed to Donington Park for the second meeting of the year.

The West Thurrock based team headed for the East Midlands looking to build on the results secured at Brands Hatch, with both Ollie Jackson and Ant Whorton-Eales eager to push towards the points scoring positions in their Audi S3s.

Having opened his account at Brands Hatch, Tamworth-based Ollie started his bid for points from 25th on the grid in race one and fought his way forwards to 17th place by the time the chequered flag dropped.

Race two saw Ollie run as high as tenth before he was forced to retire after being left with nowhere to go when a car spun ahead, but he recovered well with his repaired car in a wet final race to come from the back of the grid to 15th spot – earning him the final championship point.

“There are a lot of positives to take away from this weekend,” he said. “The Audi is getting better and better, and I think we showed genuine top ten pace this weekend.

“We just needed a little bit more luck on our side and we’d have been able to bring home a top ten in the second race, although the way we came through from the back in race three to take a points scoring finish on merit is also really pleasing.

“Our race pace is good so we have to try and improve on our qualifying performance so we are better placed to make the most of it. If we can take that next step then we’ll be able to get ourselves towards the head of the midfield pack and really show what we can do.”

Having shown his pace on track at Brands Hatch, albeit without being rewarded with the end results, Lichfield racer Ant went into his home event keen to open his account but like Ollie, was on the back foot after qualifying in 29th spot.

Radical changes overnight transformed his Audi for race day and he ended race one less than half a second away from the points having made up no fewer than 13 spots during a busy 16 lap battle.

Those points wouldn’t be far away however, with a measured drive in race two being rewarded with a strong twelfth place finish and top rookie honours for the first time – giving Ant the team’s best result of the year to date.

Race three started well with Ant on the fringes of the top ten, although a slow puncture would see him slip back down the order before eventually being forced to retire on the final lap.

“Race three wasn’t how I wanted the weekend to end, but overall I’m really pleased,” he said. “After qualifying, we took a gamble with the car for race day and it really paid off. We were able to lap quickly, made up loads of places and I got into the points, which is a real achievement from where we qualified.

“I knew early on there was a problem in race three as there was a vibration under braking that got worse as we went on, but I think we can come away from this weekend feeling confident about the races to come as we’ve taken a massive step forwards.”

Team boss Shaun Hollamby was pleased to see both drivers score points, admitting it had been one of the best weekends to date for the Audi squad.

“Both drivers have done a brilliant job this weekend,” he said. “It’s probably been the most competitive weekend we’ve had in terms of our pace, particularly in the second race where Ant got well earned points and Ollie could also have scored. Ollie also did really well in tough conditions in race three and for both to score points this weekend is promising.

“The improvement in the car is clear to see, and hopefully when we get to Thruxton we can produce an even better performance on track.”

Credit to CarSceneUK.com for Image.