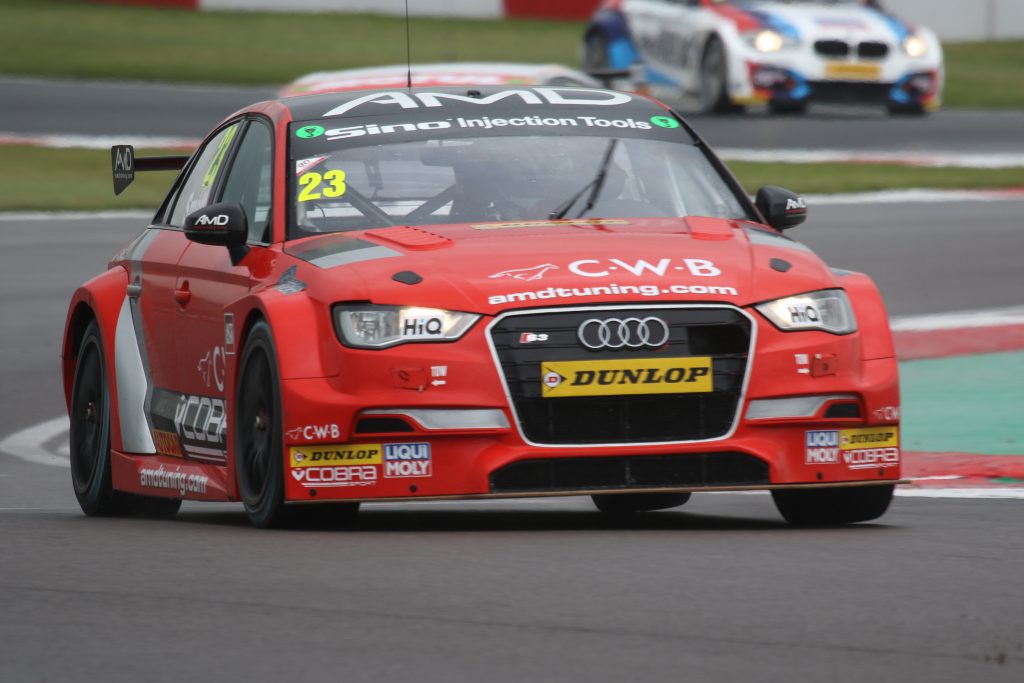 The AmD with Cobra Exhausts team was left to wonder what might have been after missing out on more strong points as the Dunlop MSA British Touring Car Championship headed for Donington Park for the second round of the year.

The West Thurrock-based team was looking to build on a fine season opener at Brands Hatch, where Ollie Jackson had picked up a podium in his Audi S3 and rookie Sam Smelt had secured three solid finishes on his series debut.

Ollie qualified in 27th place having been stripped of his best time in the session for exceeding track limits; a lap that would have put him 18th on the grid for his 150th race in the series.

Showing the pace in his Audi, Ollie made up six places on the opening laps and was making good progress until he came up behind the Honda of James Nash, with ultra-defensive driving from his rival leaving him to finish the race in 19th place.

Going into race two, Ollie was keen to continue his forward progress and moved up five places on the first lap into the points scoring positions. Having climbed to twelfth, a top ten finish looked like being on the cards before contact from Rob Collard’s BMW at the start of the fourth lap saw him go off track at Hollywood.

Forced to pit as a result, he would end the race down in 29th place, which is where he then started the final race of the weekend. A storming first lap saw him rocket up to 18th place despite being on the less favourable hard tyre and although he would get up into the points, Ollie would be shuffled back to 16th at the finish – just missing out on adding to his championship tally.

Team-mate Sam enjoyed an impressive performance in qualifying at the wheel of the sister Audi to qualify in 18th place, with his focus for race day being to try and gain valuable experience of running in the pack.

Maintaining a place inside the top 20 in the early laps, Sam lost places when an error on lap four saw him run off track and from there, he focused on bringing his car to the finish which he did in 28th spot.

Race two would end in disappointing fashion when driveshaft failure forced him to retire after eight laps whilst there was further misfortune in race three when, having made up five places, he was tipped into a spin at the Old Hairpin that dropped him off the back of the field; a 24th place finish being the end result.

“If anything, the performance of the Audi was actually stronger than it was at Brands Hatch but where we were in qualifying hurt our chances. Race one was going well until we came up behind the Honda and there is no doubt we’d have had a top ten in race two without being punted off.

“On the hard tyre, it was a case of doing what we could in race three and we nearly got some points so I’m not disheartened. Clearly we have good speed in the car and hopefully we can be back in the points at Thruxton.” 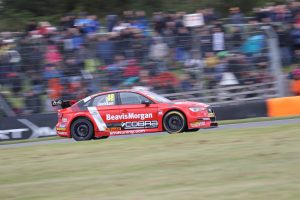 Sam Smelt, #23 AmD with Cobra Exhausts Audi S3, said:
“I took a big step forwards in qualifying and to be 18th on the grid was fantastic as it put me right in the mix. I have to hold my hands up that I made a mistake in race one which was a shame, and then in race two, there was nothing I could do about a mechanical problem that forced us out.

“In race three, I got hit off track which dropped me way behind the rest of the field and it just sums up the luck I had on race day if I’m being honest. Despite that, I’m not disappointed because I’ve been able to learn a huge amount again – more than I did at Brands Hatch. The aim now is to keep making progress at Thruxton in a few weeks time.”

Shaun Hollamby, AmD with Cobra Exhausts team principal, said:
“Both Ollie and Sam have done a good job on race day and it’s unfortunate that the end results don’t reflect it. Ollie was on the back foot after qualifying but the pace he showed in the three races was very encouraging and he could well have come away from the weekend with some good points on his board.

“Sam has also taken a big step forwards in terms of his performance this weekend and it is unfortunate that luck wasn’t on his side on race day, but he I hope that when we get to Thruxton he can continue to move his way forwards towards the points scoring positions.”