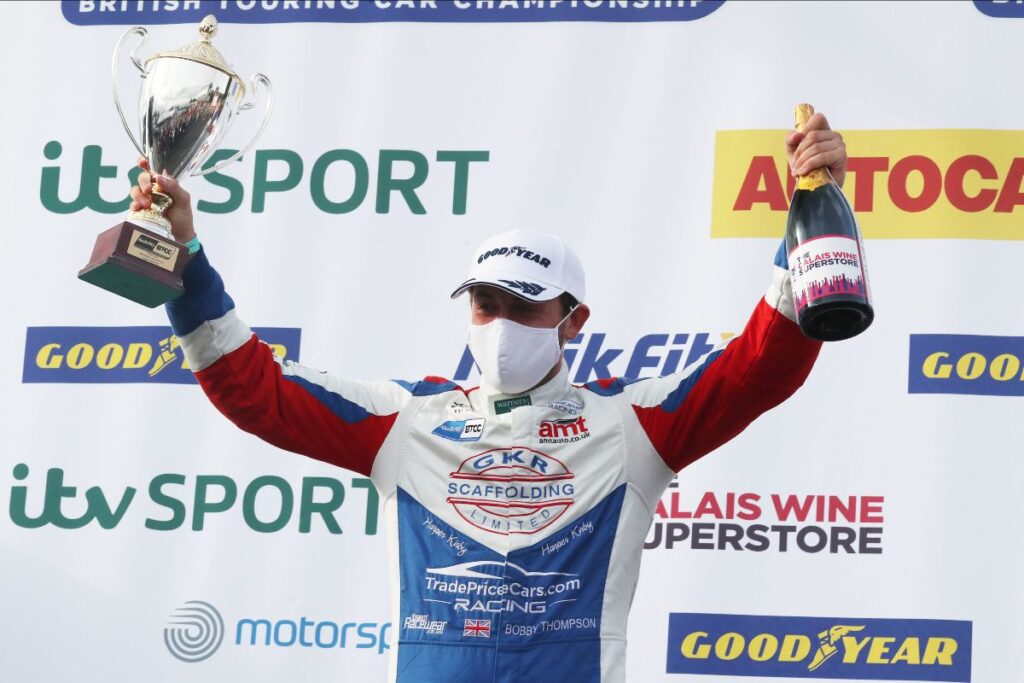 The AmD Tuning run Audi S3’s with GKR TradePriceCars.com team was able to celebrate a second successive win in the Jack Sears Trophy at the end of a tough weekend of racing as the Kwik Fit British Touring Car Championship headed for Oulton Park for the third round of the year.

The Audi team made the long trip to Cheshire keen to challenge inside the top ten, with drivers Bobby Thompson and James Gornall confident about impressing in their Audi S3s.

Saturday would prove to be a challenging day for the pair however, with both drivers left with work to do on race day after a difficult qualifying session.

James would find himself 22nd on the grid for the opening race despite setting a time just 1.3s off pole position, but Bobby would fail to set a time after a spin at Cascades on his first flying lap left him to start from 27th and last on the grid.

Race day dawned with rain in the air, and the heavens opened as the cars headed for the grid, with both drivers ultimately swapping to wet tyres before the start of race one – which was delayed after an incident for another driver on the green flag lap.

Once the action finally kicked off in treacherous wet conditions, the two Audis were quickly on the move, with James climbing up into 19th and Bobby jumping into the top 20 to leave the two running together by the end of lap two.

After a brief caution period, Bobby’s charge up the order continued despite a brief scare when the Infiniti of Aiden Moffat suffered a spin in front of him at Old Hall. Into the points by lap eight, Bobby would secure the final point in 15th spot before being promoted to 14th after the exclusion of Josh Cook.

James meanwhile would run inside the top 20 throughout and crossed the line in 18th despite suffering visibility problems throughout the race.

Race two would be one of mixed emotions for the team, with James the unfortunate victim of contact from the Honda of Matt Neal whilst dicing for the points early on, leading to him retiring on the fourth lap.

Another demon start for Bobby however had seen him rocket up to tenth on the opening lap, and from there he would hold his position through to the finish and was rewarded afterwards with the reverse grid pole for race three.

Bobby took his place on pole for the final race but would struggle for outright speed in the now dry conditions and slipped down the order to eventually cross the line in 18th spot. However, his combined results across the weekend meant he secured the Jack Sears Trophy.

James had been keen to try and end his weekend with some points on the board, but his forward progress from the back of the field was halted when he was forced off track by the Volkswagen of Ollie Brown at Cascades – dropping him to the back of the field and leaving him with damage he would carry through to the finish.

“I’m over the moon to come away with some points and a trophy given what happened in qualifying. The car was absolutely mega in the wet and we were right on the pace, but clearly we have some work to do in the dry as I was struggling with the brakes in race three and just couldn’t do anything.

“I knew in races one and two that we could make up places and pick people off if we were careful and I was hoping it would stay wet for race three but it wasn’t to be. It’s a shame the rain didn’t stay as I think we could have picked up a really good finish, but for the team to win the Jack Sears Trophy for the second weekend in a row is a good result.”

“It’s been a really tough weekend at a circuit that I love, which is a real shame after a strong showing at Brands Hatch. We didn’t have the pace in qualifying which put us on the back foot, and then in race one, I had an issues with the wipers and some water in the car so I couldn’t see a thing.

“In race two I got taken out by Matt Neal and whilst he apologised, it doesn’t change the result unfortunately. I was making progress in race three but Ollie Brown then pushed me off which cocked things up; it damaged the front of the car and meant I had no brake cooling so I couldn’t go very fast even though I continued. The boys have a bit of work to do to fix the car and we’ll just hope for more fortune next time out.”