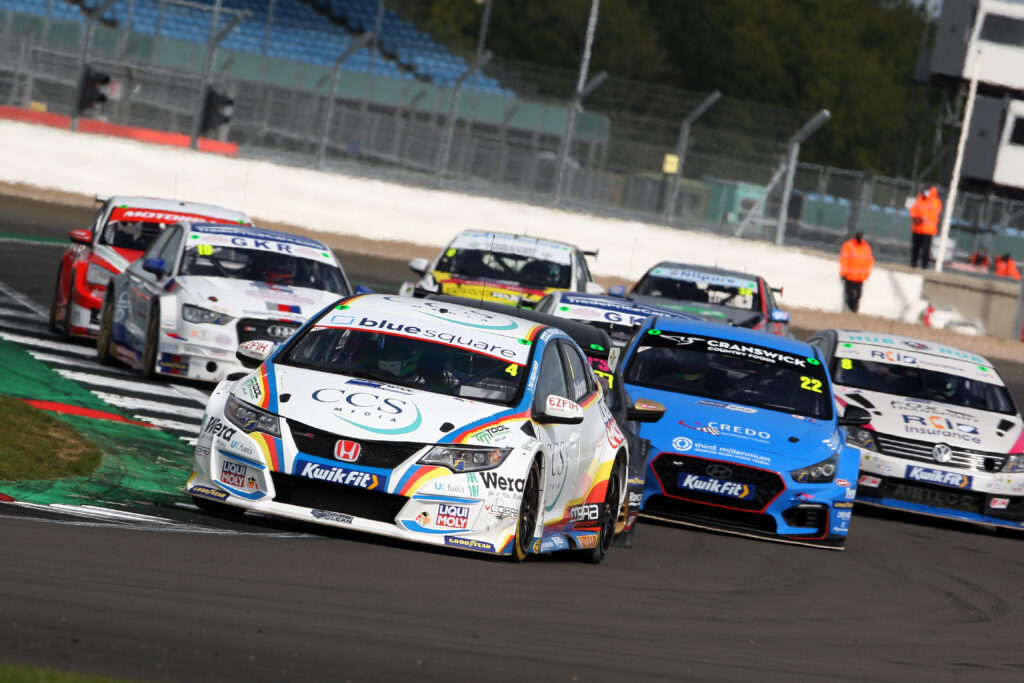 AmD Tuning with MB Motorsport accelerated by Blue Square produced a battling display on track at Silverstone to secure four points finishes from a possible six in the latest rounds of the Kwik Fit British Touring Car Championship.

Running a revised livery on its Honda Civic Type Rs to incorporate CCS Media as part of the team’s unique partnership with HP UK and Intel UK, the team headed into race day looking to build on a strong run in Saturday’s qualifying session.

There, Jake Hill maintained his record of being inside the top ten on the grid for every meeting this season as he set the tenth fastest time, with Sam Osborne in 17th spot – albeit with a lap only two-tenths of a second slower in the tightly-packed field.

Jake would slip down to twelfth spot on the opening lap of race one but having got ahead of the newer FK8 Honda of Josh Cook on lap two, he then managed to clear both Matt Neal and Tom Chilton at Becketts on lap four to move up into ninth just before the safety car was deployed.

On the restart, Jake battled ahead of Ollie Jackson’s Ford and he then climbed to seventh when Tom Oliphant ran into technical issues; retaining the place to the finish despite the best efforts of former champion Neal to get back ahead.

Sam would spend the race dicing for position with the Hyundai of Chris Smiley and would end the race where he started, but optimistic about pushing forwards for points in race two.

A solid start to the second race saw Jake fight his way up into the top five on the opening laps but he would then lose two places on the eleventh lap when he was run wide by Matt Neal in a move that also allowed Josh Cook to sneak through. Jake would end the race back where he started to secure another solid seventh place finish.

Sam would also make places up at the start in the sister Honda to end the opening lap inside the points, and he produced a solid drive to stay out of trouble in the midfield pack, matching Jake’s pace and being rewarded with a twelfth place finish.

The early stages of the reverse grid race three saw Jake running in third place despite huge pressure from Cook’s newer Honda before the action was halted by an accident for Rory Butcher.

On the restart, Jake got forced out on the opening lap and would struggle to match his pace from earlier in the day as he wrapped up the weekend with a 15th place finish. However, the points scored across the weekend mean he has now moved back into the top ten in the championship standings.

Sam would run inside the points in the early stages of the restarted race in the sister car, but contact on track would hamper his chances of adding to his tally as he finished the weekend with a 20th place finish.

Shaun Hollamby, Team Principal, MB Motorsport accelerated by Blue Square:
“On the whole it’s been a solid day on track and it’s good that both Jake and Sam have come away from Silverstone with points on the board, even if the final race didn’t quite to go plan. This isn’t the strongest circuit for the car, but both drivers have battled hard on track today and we know that the three venues we have left this season will play to our strengths more.”

Mark Blundell, Sporting Director, MB Motorsport accelerated by Blue Square:
“Jake and Sam have both driven well today and we’ve got some solid points on the board from three tricky races on track. Jake did well to improve on his qualifying position in the opening two races and it was great to see Sam break back into the points after a few tough meetings. It’s a shame we couldn’t get more from race three, but we can head away from Silverstone looking at the positives and turn our focus to fighting towards the front at Croft.”

Jake Hill, #24 MB Motorsport accelerated by Blue Square Honda Civic Type R:
“It was a good day for us until race three, and we had probably done better than we hoped to do at a circuit that doesn’t play to our strengths. The car was good in race one and race two, but in race three, it just wasn’t there for me. We need to take a look over things to see why we didn’t have the performance in that one, but we come away from the weekend having moved back into the top ten in the standings and have to take the positives from races one and two.”

Sam Osborne, #4 MB Motorsport accelerated by Blue Square Honda Civic Type R:
“It’s been a rollercoaster of emotions for me. We were making good progress in the opening two races but like Jake, race three just didn’t go my way. We were struggling a bit for straight line speed and got caught up with a little bit of contact, but a tiny sideways moment from a little tap really hurts on the next straight here and you get swallowed up by the cars behind. It’s a shame that we couldn’t pick up the Jack Sears Trophy this weekend as we had a real chance, but it’s good to come away from the weekend having battled back into the points.”