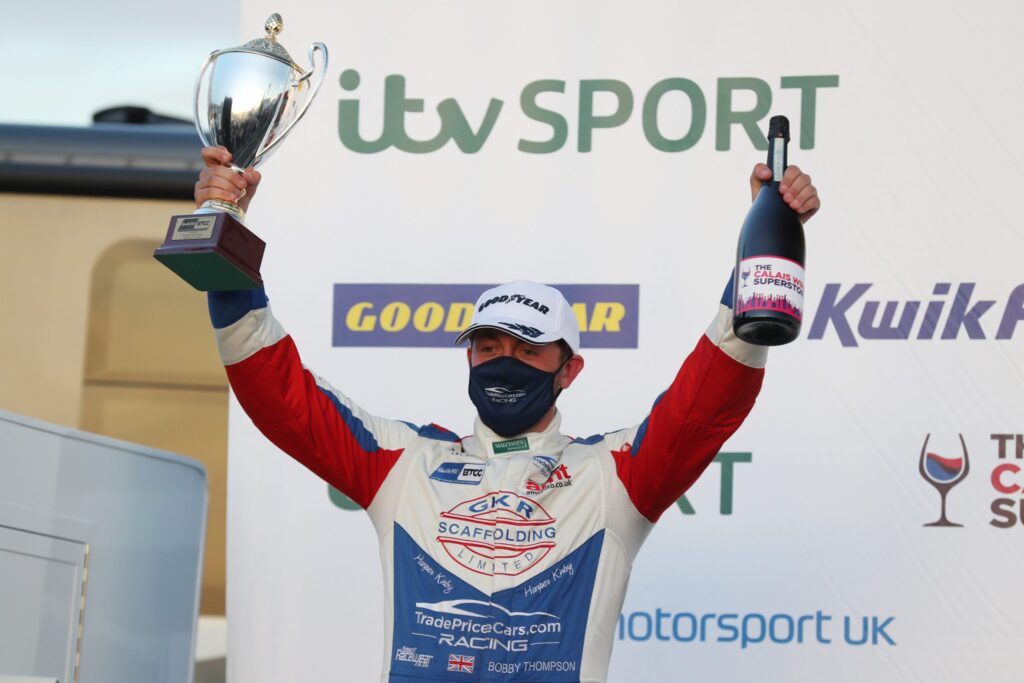 The AmD Tuning run Audi S3’s for GKR TradePriceCars.com team was able to celebrate a third Jack Sears Trophy victory in six rounds as the Kwik Fit British Touring Car Championship headed for Silverstone for the latest meeting on the 2020 calendar.

The award-winning, Essex-based motor dealership was optimistic about being in the fight for points at the Home of British Motorsport, with drivers James Gornall and Bobby Thompson both seeking to fight for JST honours amongst those drivers yet to stand on the overall podium.

Free practice had shown the potential of the team’s Audi S3 after a storming lap from Jiggy saw him put the #180 car into ninth spot – ahead of defending champion Colin Turkington – in the second session, with Bobby also improving on the time he had set in FP1 to leave the team confident going into qualifying.

Unfortunately, the session would prove to be frustrating as although Bobby set his fastest lap of the day to qualify 19th, James would fail to set a time after being hit by the Mercedes of Jack Butel on the Wellington Straight just minutes after the green flag had flown.

That meant a busy evening for the team to repair extensive damage to the front right of the Audi, and left James to start the opening race from the back of the field.

Although he slipped back a few places in the early stages of the race, Bobby battled hard after an early caution period to work his way back up to 18th place by the finish, emerging ahead of multiple race winner Tom Onslow-Cole after a battle that played out on track through the second half of the race.

With the sister car having been fully repaired ahead of race day, James took his place at the back of the field and a strong opening lap saw him jump up immediately into 22nd place.

Having overtaken Bobby on lap two, Jiggy was dicing for position with Michael Crees before contact between the pair going into Becketts saw him slip back down the order to 25th. He would manage to make up three places after the restart to cross the line in 22nd.

The second race of the weekend saw Bobby once again fight back from losing places in the early stages to push towards the points and a battling drive – alongside some misfortune for a few of his rivals ahead – saw the 24-year-old rewarded with 13th place at the chequered flag.

James was also moving towards the points after a strong start saw him climb up to 17th by the end of the lap two, but he was then swallowed up by the cars behind when he was forced to back off after Tom Oliphant’s BMW had a moment ahead on lap six.

That dropped him down to 20th, but he would recover to 16th by the finish despite struggling for front end grip, missing out on the points by just three tenths of a second.

The final race would be a chaotic affair that was red-flagged after five laps following a huge incident for the Ford of Rory Butcher on the run to Becketts, which saw his car roll after contact with the barriers before coming to rest on the circuit in front of the field.

Both Bobby and James were able to take evasive action to avoid the stricken car, although Bobby would sustain damage to the front of his Audi when one of his rivals checked up ahead as the incident unfolded.

The action resumed as a 12 lap sprint, and Bobby ended his weekend with a solid twelfth place finish that ensured a second points score and also made him the Jack Sears Trophy winner for the weekend. With previous leader Michael Crees running into trouble, Bobby now also leads the JST standings with six of the nine meetings run.

Unfortunately for James, his weekend would end in disappointing fashion when an engine issue forced him to retire the sister car on the fourth lap, preventing him from fighting to join Bobby in the points.

The team now heads for Croft in North Yorkshire for the seventh meeting of the season in two weeks time.

“At the end of the day on Saturday, I was sat in my motorhome eating chocolate and having a moan about how things had gone, so it’s nice to get to the end of race day with a trophy and some champagne instead!

“We picked people off in the first two races and made some minor changes to the car, and in the final race, we didn’t suffer the drop off in the tyres that we have suffered before – no more than you would expect naturally anyway – and we had a lot more traction.

“I think we’ve found something positive there with the car and that’s down to the hard work from the team as they have worked hard again this weekend, particularly after the red flag when they had to fix a bit of front end damage in a short space of time.

“It’s great to have won the Jack Sears Trophy for a second time and to now be leading the standings is a big bonus. We just have to push hard now to try and make sure we stay out front.”

“We were running old tyres in FP2 so when I saw we were right up there, it left me feeling confident for qualifying as we had a chance to be right in the mix. Looking at how the session panned out, we certainly could have been in the top ten but instead, a ridiculous incident that shouldn’t have happened put us on the back foot.

“I wasn’t able to make the progress I was hoping for in race one as I got a hit from Crees when I was making a move on him, and that cost me time and also ruined the tyres. In race two, I nearly got into the points but I was struggling with the front end after the opening few laps and didn’t quite have the performance.

“In race three, I was coming through Luffield and the engine dropped onto three cylinders so I just brought it straight in and had to retire. It’s frustrating because this is a weekend where we could have picked up some solid results and instead, we’ve come away empty-handed.”