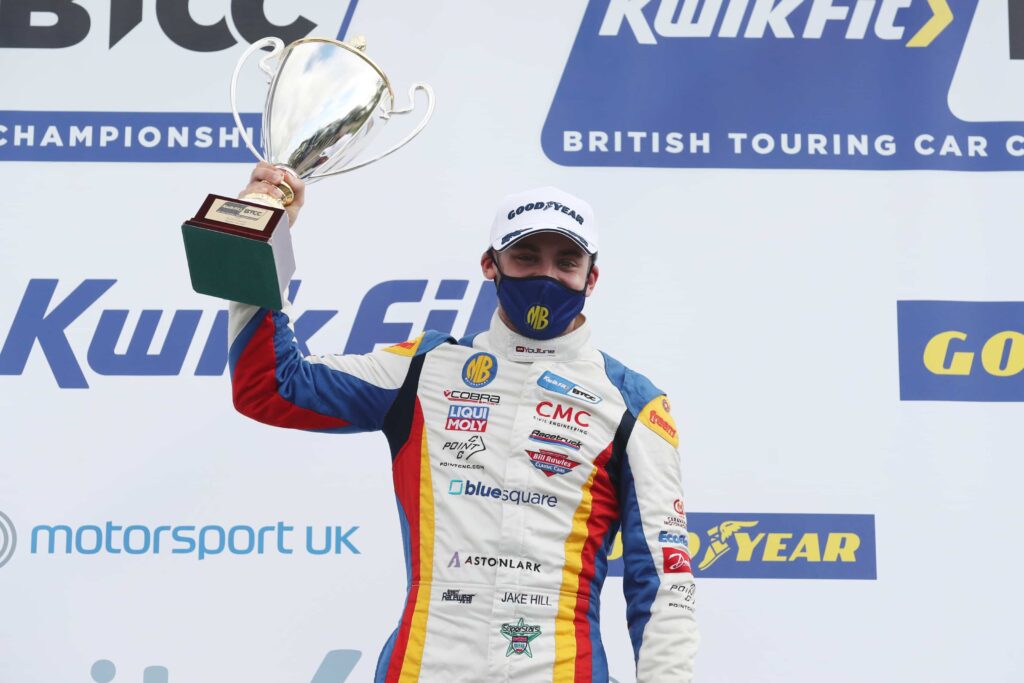 MB Motorsport accelerated by Blue Square enjoyed its best weekend of the Kwik Fit British Touring Car Championship season to date with a double podium finish and a big haul of points from the seventh round of the year at Croft.

Sporting a new Total Computers-inspired livery, thanks to the team’s channel partner activation with HP and Intel, the Honda squad headed into race day in a strong position on track. After a successful Saturday, where Jake Hill put his #24 Civic Type R on the front row of the grid and team-mate Sam Osborne securing P17, the team were confident on a strong race day at Croft.

Although he briefly dropped behind defending champion Colin Turkington at the start of the opening race, Jake quickly regained the position with a fantastic move around the outside of the BMW driver to run in second place. Pushing race leader Josh Cook, Jake produced a fine drive on what was a greasy circuit to keep Cook honest at the front as he gradually edged away from Turkington behind.

The end result was a fine second-place finish, which marked Jake’s best result of the season to date and MB Motorsport’s best-ever result in the BTCC.

Sam had been hopeful of fighting his way forwards into the top-15 positions, but an unfortunate trip off track at the complex saw him forced into the pits to retire, leaving him down in 25th place on the grid for the second race of the weekend.

That race saw Jake again starting from the front row and, despite carrying 54kg of success ballast, he held his position off the start before a brief caution period to recover Turkington’s BMW from the gravel at turn one. On the restart, Jake was under huge pressure from the Infiniti of points leader Ash Sutton, with the pair coming to blows on lap six when Sutton tried to make a move up the inside at the hairpin.

Luckily, Jake was able to continue without major damage but would slip behind Matt Neal in the closing stages before taking the flag in third place – marking the first time in his BTCC career that he has picked up two podium finishes from a single weekend.

A storming start to the race for Sam saw him move up nine positions to 16th place by the end of the opening lap, and he would then move into the points when Sutton was forced to pit. Battling ahead of Mike Bushell near the end, Sam was rewarded with a 14th place finish after making up eleven spots from his starting position.

The reverse grid final race saw Jake carrying 48kg of success ballast from his P4 grid position and a difficult start for the #24 driver saw him slip to eighth position on the opening lap. Although he would climb as high as fifth after an early safety car period, Jake had to settle for seventh place at the finish. Jake’s impressive weekend saw him collect the second-most points out of the field and now sits just a point outside the top-ten in the overall championship standings, and fifth in the Independents’ Trophy.

Sam would run in the points throughout and looked set to match his race two result until the final lap when he lost a place to Stephen Jelley, although he still picked up his first double score of the season with 15th. Crucially for Sam, the strong results in the second and third races mean he is now up to third in the Jack Sears Trophy standings and firmly in contention for honours with two rounds, and six races, left to run.

The team, who picked up the third-most points this weekend, now heads for Snetterton in Norfolk for round eight at the end of the month.

Shaun Hollamby, Team Principal, MB Motorsport accelerated by Blue Square:
“This has been our strongest race day of the season so far and Croft has proven to be a happy hunting ground for us. Jake has done an exceptional job today to secure his first double podium and Sam also did well to fight back and score two points finishes himself after what happened in race one. We’ve now finished on the second and third steps of the podium this season, and will be pushing hard to make sure we finish on the top step before the campaign is done.”

Mark Blundell, Sporting Director, MB Motorsport accelerated by Blue Square:
“On the back of a strong day on Saturday, it’s great for the team to have picked up a first double podium today. Jake has done a fantastic job on track and his talent has shone through, and Sam has also done well to recover from race one with two solid points finishes. This has been our highest scoring weekend of the season and gives us a good platform to build on in the final two rounds.”

Jake Hill, #24 MB Motorsport accelerated by Blue Square:
“I’m chuffed with the weekend and it’s been a great one for the team. The car has been rapid and to get two podiums is fantastic. Had it not been for a bad start in race three, I think we could have up there in the top four in the final race as well, but I’m not going to complain. This wasn’t a circuit where I expected us to be strong and instead it has been one of our best weekends of the season, which is a nice surprise. I love the two circuits that are still to come and am in a good place at the moment, so I’ll be pushing for that win.”

Sam Osborne, #4 MB Motorsport accelerated by Blue Square:
“This is only my fourth time at Croft and it’s been a bit of a steep learning curve. Things didn’t start too well in race one with the retirement and it was a case of mixed emotions as the data showed I was matching Jake, but I just carried too much speed into the complex; I think I ran out of talent a bit there! To make up eleven places in race two was really good and then we rounded it off with more points in race three, so I’m happy with how things ended.”