AmD with Cobra Exhausts Pay The Price of Contact at Silverstone 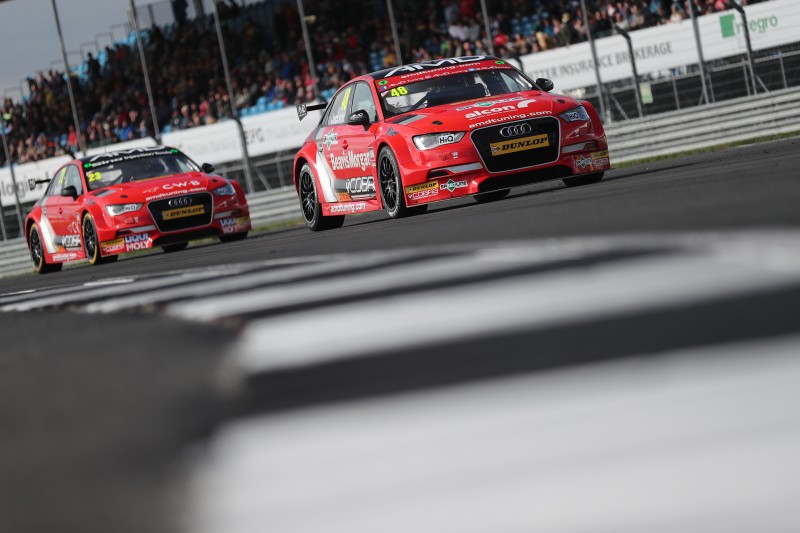 The West Thurrock-based team headed for the Northamptonshire circuit eager to fight back from a tough weekend at Knockhill, with drivers Ollie Jackson and Sam Smelt targeting points around the short National layout.

Tamworth-based Ollie qualified 23rd on the grid for the opening race in his Audi S3 having posted a best time that was less than half a second away from pole position in the ultra competitive field.

Despite running the less favourable hard tyre in the opening race, Ollie managed to battle his way forwards to 17th place to leave him well placed to push towards the points in race two.

Although he ran in the top 15 in the early stages, an overheating engine and mid-race contact would hurt his chances of adding to his points tally and resulted in him dropping back down the order before eventually finishing in 25th spot.

The gremlins would continue in the final race but proved to be the least of Ollie’s problems when contact between two drivers ahead meant he had nowhere to go when the BMW of Stephen Jelley was suddenly sideways in front of him at Luffield.

Heavy contact left the Audi nursing extensive damage to the front end and put Ollie out of the race on the spot.

Northampton racer Sam had qualified 28th in the sister Audi for his home meeting but would see his race day affected by multiple bouts of contact that limited his ability to race forwards through the pack.

Having briefly broken into the top 20, Sam would take a 22nd place finish from the opening race of the weekend before he took the flag in 26th in race two whilst running on the slower hard tyre.

Starting to make up places in race three, Sam would endure more contact from the same driver who had hit him in race one and had to settle for 23rd place.

“It’s hard to know what to say about the weekend and I leave Silverstone frustrated that an incident like the one in race three has left us with a car that is extensively damaged through no fault of our own.

“It had been a tricky race day because of the need to run the hard tyre in race one and with the overheating issue we had in race two, but we could have possibly salvaged some points from race three.

“Sadly, Stephen was turned around right in front of me and I had nowhere to go but right into the side of him, which was a big hit for us both. It’s disappointing because it’s an incident that shouldn’t have happened.”

“It’s a shame that we haven’t been able to come away from race day with some stronger results because we had some decent pace in the car on Sunday. Qualifying didn’t go to plan, but in the opening race we were making up places before contact damaged the rear and affected the handling, which saw me drop back.

“Race two was difficult on the hard tyre but we could have done okay in race three without more contact from the same driver. It’s disappointing because I don’t think the results reflect the pace that we had in the car and I’ll go to Brands Hatch looking to try and end the season with some decent results to my name.”

“It’s fair to say that I’m not happy heading away from Silverstone because poor driving standards have affected both of the Audi drivers this weekend. It’s something that needs to be looked at because incidents like those Ollie and Sam have encountered are completely needless, and the result has been damage to both of our cars and a large repair bill at the end of it.

“It leaves us with a lot of work to do ahead of Brands Hatch but we’ll leave no stone unturned to make sure we come out fighting on home soil for the season finale.”