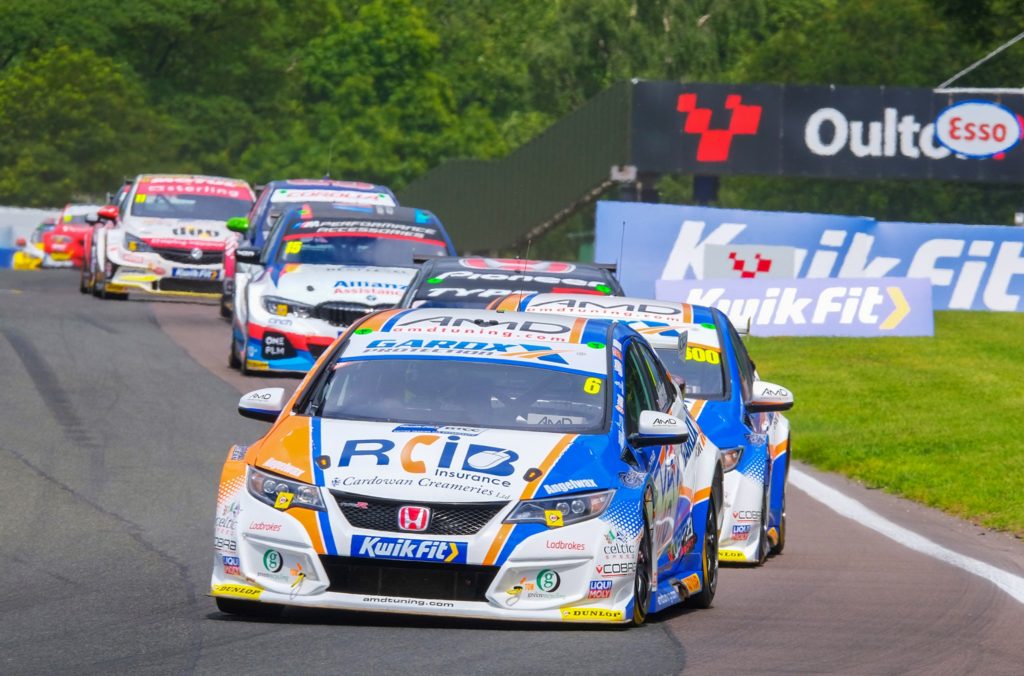 The Cobra Sport AmD with AutoAid/RCIB Insurance Racing team was able to celebrate a fourth podium finish of the Kwik Fit British Touring Car Championship season on a strong weekend on track at Oulton Park.

The West Thurrock-based team made the long trip to Cheshire ready to fight back from a tough weekend at Croft, where qualifying issues had hampered both Rory Butcher and Sam Tordoff in their quest for points.

Having topped the times across the two free practice sessions, Leeds racer Sam led the team’s challenge in qualifying as he put his Honda Civic Type R second on the grid, lapping just 0.027s down on the pole sitting BMW of Colin Turkington.

Although he would lose places off the line when the lights went out, Sam quickly slotted into fifth place and maintained his position through to the finish despite close attention from Tom Oliphant behind.

Race two would follow a similar theme for the former series runner-up as he held station throughout the 18 lap encounter, defending well in the closing stages to keep the rapid BMW of Stephen Jelley at bay.

Seventh on the reverse grid for race three, Sam found himself up in the top four having avoided a chaotic incident ahead of the third lap and would dice with Oliphant’s BMW before crossing the line in fourth spot.

However, a post race penalty for Jake Hill meant he inherited third for a second podium finish of the season, leaving Sam 13th in the overall standings going into the summer break and fourth in the Independents’ title race.

Fife racer Rory was eager to get his title challenge back on track and qualified in fifth place on the grid for the opening race of the weekend.

A strong start saw him move up into fourth place when the lights went out after battling ahead of Sam and the Scottish racer would hold his place to the finish despite a mid-race Safety Car period having been unable to match the pace of the three cars ahead.

A seventh place finish in race two saw Rory put more solid points on the board and he headed into the final race of the weekend hoping to impress from fifth on the grid.

Having held station through the opening laps, Rory was lucky to avoid the incident at the start of lap three that caught out a number of the front-runners and emerged in second place – but nearly six seconds down on leader Hill.

Hunting down the Audi ahead, Rory closed the gap until he was in a position to attack for the lead, which he did at Island on the penultimate lap. Unfortunately, the Honda would slide wide on coolant dropped earlier in the race and Rory slipped back to sixth spot where he would remain to the flag – then inheriting fifth when Hill was handed a time penalty.

At the half way stage of the season, he sits fourth in the overall standings and leads both the Independents’ and Jack Sears Trophy.

A strong haul of points for the team, second only to the works BMW outfit, means Cobra Sport AmD with AutoAid/RCIB Insurance Racing holds third in the Teams’ Championship and is second in the Independent Teams’ standings. 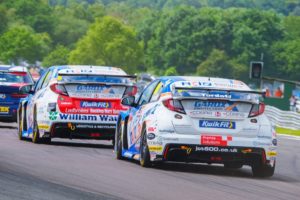 Shaun Hollamby, Cobra Sport AmD with AutoAid/RCIB Insurance Racing team principal, said:
“It’s been a really strong weekend for us as a team, and to come away from Oulton Park second only to West Surrey Racing in terms of points scored is fantastic when you consider how strong the BTCC grid is at the moment.

“Both drivers have done a great job on track, and it was good to see Sam pick up three solid finishes from the weekend and take another podium. He hasn’t had the rub of the green so far this season, and hopefully this weekend will lead into more strong results in the second half of the year.

“Rory’s pace in the last race was fantastic and that showed in the way he chased down Jake for the lead. Of course it’s a shame that he missed out on what would have been a victory but to come away from the weekend a point away from the top three in the championship is great for him and we need to work hard to maintain that.

“We knew that expectations would rise this season with the Honda and to be where we are in the Teams’ Championship at the half-way stage is a brilliant achievement for us as we aren’t a big team and we’ve shown that we can really take the fight to the more established front-runners.

“With a two-day test coming up to work on the cars, we’re confident of keeping our strong form going in the second half of the year.”

Rory Butcher, #6 Cobra Sport AmD with AutoAid/RCIB Insurance Racing Honda Civic Type R, said:
“It was important to get some good points after Croft and to beat 30 across the weekend is another solid haul. The car was strong all weekend and we were able to make some good progress in making improvements, which was reflected in the pace in race three.

“Of course there is frustration at what happened in the final race and I’m a bit disappointed for the team as I feel I let them down a bit with an error on my part. They had given me a great car and I was making the most of it until that penultimate lap when I had the moment at Island.

“In hindsight, I could have just settled for the position but these things happen in racing and we have to just put it behind us and look ahead to the upcoming test at Snetterton and then the second half of the season.”

Sam Tordoff, #600 Cobra Sport AmD with AutoAid/RCIB Insurance Racing Honda Civic Type R, said:
“I’m really pleased with how the weekend has gone. To qualify on the front row of the grid and get so close to the BMW was great and that really set us up for race day as Oulton Park is one of the hardest circuits on the calendar to overtake.

“It provided a real platform for us to pick up a decent haul of points and while we didn’t quite have the pace I would have liked on race day, I can’t complain with three top five finishes.

“I had to drive with an eye on my mirrors more than looking ahead throughout race day and it certainly wasn’t easy, but hopefully the results we’ve secured this weekend can help kick-start us for the rest of the year.

“As a team, we’ve scored a load of points this weekend to go into the summer break in a strong position and given how the Honda has performed at Snetterton in the past, I think we can look forward to heading there for the next round in a months time.”