Silverware at Oulton Park for the AmD Tuning BTCC Hondas 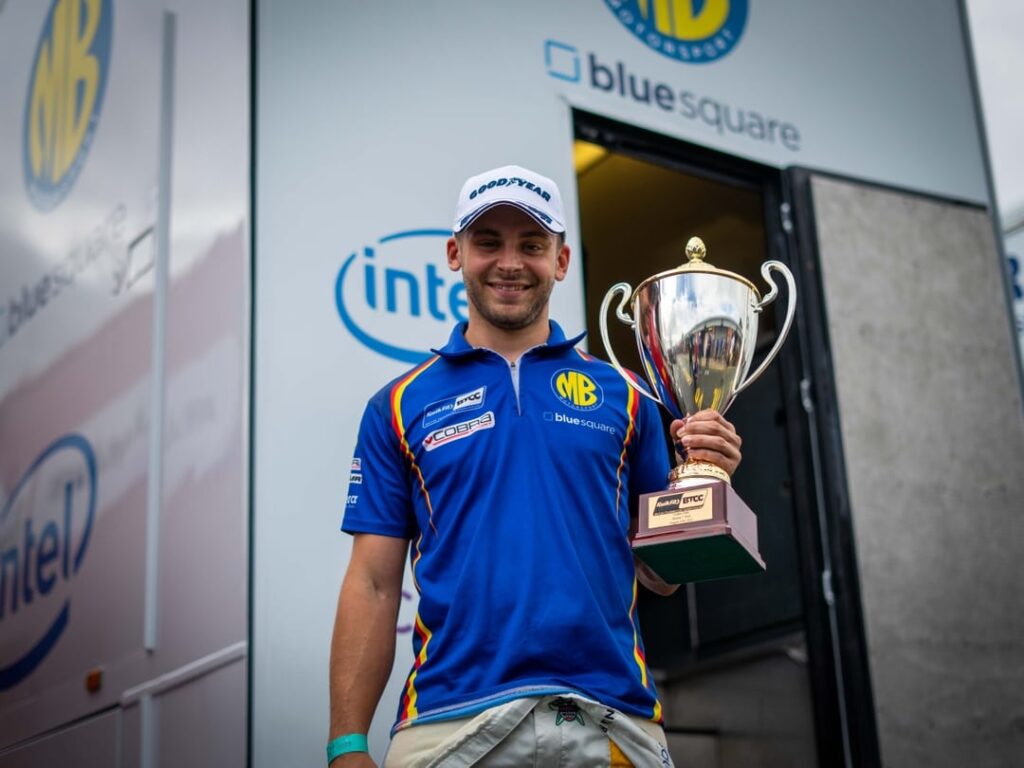 AmD Tuning with MB Motorsport accelerated by Blue Square secured silverware for the first time in the 2020 Kwik Fit British Touring Car Championship after a strong showing on track at Oulton Park.

Race day would prove to be one of the most challenging of the season for drivers Jake Hill and Sam Osborne thanks to heavy rain that hit the Cheshire circuit, with mixed conditions having a role to play across all three races.

Having qualified in sixth place, Jake went into the opening race keen to try and push forwards towards the podium places, and the Kent-based driver stayed out of trouble when the lights went out with rain falling.

Although he dropped a place on the opening lap, Jake wasted little time in getting back ahead of the factory Honda of Matt Neal and than battled ahead of the BMW of Tom Oliphant into fifth spot. After a brief caution period, Jake swept ahead of defending champion Colin Turkington with a solid move at Old Hall, and ran in fourth place through to the finish.

With winner Josh Cook then excluded for failing the ride height test, Jake was promoted into third place, and secured his first podium finish of the season. From 20th on the grid, Sam found himself right in the heart of the action in the sister Honda, but survived the race unscathed to finish just outside the points in 16th.

Race two saw Jake suffer a scare before the start when his car developed a misfire on the green flag lap, which looked like it could end his chances of further points before the action got underway. However, with the issue occurring in slower corners, Jake was able to drive around the problem and was rewarded with a solid seventh place.

Sam ran well in the opening laps to sit inside the points before a trip across the grass at Knickerbrook cost him valuable time, and he crossed the line in 17th spot to just miss out on adding to his points tally.

The reverse grid final race saw Jake repeat his race two result with another seventh-place finish, despite an issue with the battery on the #24 Honda, enabling him to move to within eight points of the top ten in the championship standings, and up to ninth in the Independents’ category.

On a now dry circuit, Sam would end the weekend with his best result of the day, running on the fringes of the top-ten throughout before crossing the line in eleventh to ensure he scored points for the third weekend in a row.

It means Sam sits 13th in the Independents’ standings and has moved to within three points of the top-three in the Jack Sears Trophy ahead of the next round at Knockhill in seven days time.

‍
“It’s really pleasing to be leaving Oulton Park with some silverware for the first time this season and it’s a good way to reward the team for the hard work it has put in this season. It certainly hasn’t been an easy weekend with the weather conditions being as they are, but both Jake and Sam have driven well and stayed out of trouble, which is important when you consider that we have to go straight from here to Knockhill. We ran well there last season so hopefully, this weekend is the one that kick-starts our season and we can challenge again in Scotland.”

‍
“We’ve been strong on Saturday at both meetings so far and then things haven’t gone our way on Sunday, so I’m really pleased that luck has been on our side at Oulton Park and we’ve been able to get the kind of results we deserve. Jake drove well in the opening race to get our first silverware of the year and Sam has done a solid job again to score points for the third weekend in a row. It’s onwards and upwards from here.”

‍
“We had a bit of luck in race one to get the podium with what happened to Josh, but I feel I drove well in that race and the car was fantastic. It showed the pace we knew was there and that we have had all year, but it just added the reliability into it. The other two races were good although we had a bit of a misfire in race two and then a battery voltage issue in race three so there could have been some more silverware, but it’s great to have three solid points finishes and we can go home happy. Knockhill next is a circuit I love and fingers crossed we can have a great car again in Scotland.”

‍
“It took a bit of time for me to get going this weekend but to come away from Oulton Park with points on the board for the third weekend in a row is good. The wet conditions made it really tough in the opening race and you couldn’t see a thing when you were in the pack, so it was a case of keeping calm and trying not to make any mistakes. It’s been elbows out and the rear of the car has taken a few taps but I kept it pointing the right way and we got the reward in the end.”